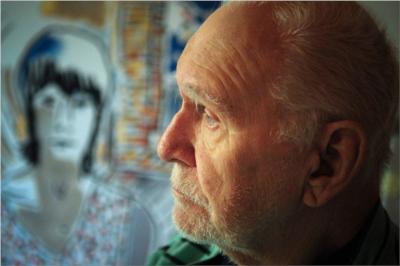 Wojciech Fangor (15 November 1922 – 25 October 2015) was a Polish painter, graphic artist, sculptor and a co-creator of the Polish School of Posters.

After privately studying art with Felicjan Kowarski and Tadeusz Pruszkowski, he obtained his diploma in 1946 at the Academy of Fine Arts in Warsaw.

He started in the Socialist realism manner, creating the “Korean Mother” (now in the National Museum, Warsaw collection).

Between 1953 and 1961, he was employed as assistant professor at the Academy of Fine Arts in Warsaw.

After the Polish October, the so-called "Gomułka's thaw" following Joseph Stalin's death, he turned away from socialist realism as a style. He became one of founders of the Polish School of Posters.

In 1970 he had, as the sole Polish artist, an individual exhibition at the Solomon R. Guggenheim Museum in New York City.

At the time of his death he resided in Błędów, Grójec County, a village near Warsaw.

Fangor designed murals for the station walls of the second line of the Warsaw Underground in 2014.