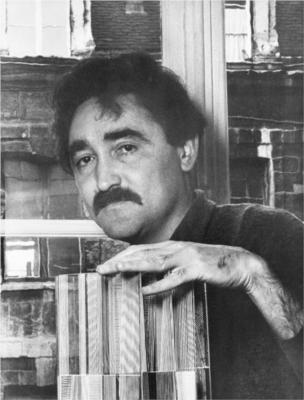 Jesús Rafael Soto was a Venezuelan op and kinetic artist, a sculptor and a painter.

He was born in Ciudad Bolívar, Venezuela. He began his artistic career as a boy painting cinema posters in his native city. He received his artistic training in Caracas. He directed the Escuela de Artes Plasticas in Maracaibo from 1947 to 1950, when he left for Paris and began associating with Yaacov Agam, Jean Tinguely, Victor Vasarely, and other artists connected with the Salon des Realités Nouvelles and the Galerie Denise René.

Soto has created penetrables, interactive sculptures which consist of square arrays of thin, dangling tubes through which observers can walk. It has been said of Soto's art that it is inseparable from the viewer; it can only stand completed in the illusion perceived by the mind as a result of observing the piece.

From 1970 until the early 1990s, Soto's works appeared in places such as the Museum of Modern Art and the Guggenheim Museum in New York City, as well as the Centre Georges Pompidou in Paris.

In 1973, the Jesús Soto Museum of Modern Art opened in Ciudad Bolívar, Venezuela with a collection of his work - a large number of the exhibits are wired to the electricity supply so that they can move. The Venezuelan architect Carlos Raúl Villanueva designed the building for the museum and the Italian op artist Getulio Alviani was called to direct it.

Jesús Rafael Soto died in 2005 in Paris, and is buried in the Cimetière du Montparnasse.

Jesús Rafael Soto was born in Ciudad Bolívar in Venezuela. The eldest of four children born to Emma Soto and Luis Garcia Parra, a violin player. From a very young age, Soto wanted to help support his family anyway he could, but art was the most interesting to him. He picked up the guitar and also began recreating famous pieces of art that he found in various books, magazines and almanacs. At 16, Soto started his serious artistic career when he began to create and paint posters for the cinemas in Ciudad Bolivar. After he painted posters, he received a scholarship to study artistic training at the Escuela de Artes Plásticas y Artes Aplicadas in Caracas from 1942 to 1947. Once there, he took classes in "pure art" and the "training course for instructors in art education history." One of Soto's professors taught many other Venezuelan artists. Antonio Edmundo Monsanto, the director of the school also taught people such as Omar Carreño, Carlos Cruz-Diez, Narsico Deboug, Dora Hersen, Mateo Manaure, Luis Guevara, Pascal Navarro, Mercedes, Pardo and Alejandro Otero. Mansanto was instrumental to many of these artists careers because he often brought in foreign books and magazines as well as many reproductions which served as a source of inspiration and information to his students.

After Soto had graduated form Escuela de Artes Platicas y Artes Aplicadas, receiving a teaching degree, he was then hired to be the director of the Escuela de Bellas Artes de Maracaibo from 1947 to 1950. When he was teaching there, he received a government grant to travel to France, and settled in Paris. When Soto arrived in Europe in 1951, Geometric Abstraction was not very popular. He proposed a new sort of movement that would add to three dimensional art. By 1954, he began associating with Yaacov Agam, Jean Tinguely, Victor Vasarely, and other artists connected with the Salon des Réalités Nouvelles and the Galerie Denise René.

Soto, along with some other artists, would began to make art that was more than just pictures. In examples such as, cubes suggerés (1955) Soto was innovative and created a new means for geometric works. Essential for these "optical illusions" was Plexiglas. Soto did not feel constricted by the size of his works. His works ranged from the smaller scale such as Estructuras cinéticas de elementos geométricos (1955) all the way to the human scale of Cube à espace ambigu (1969). During his "baroque" period, Soto expressed his ideas and visions in haptics, creating works like Puntos de goma (Rubber dots, 1961) and Borroco nergro (Baroque in black, 1961.) During this time, Soto also worked on his Penetrables which were metal and plastic works that the spectator could interact with by walking through them. Soto participated in Le Movement in 1955 which is one of the major exhibitions that helped launch his career in Kinetic Art. For years after his time in Paris, Soto's art changed between organic and geometric forms. His work is often connected to Venezuelan Op art because of the geometric shapes of his works correlate to works late in the movement. Soto's breakthrough works of the 1950s and 1960s were these abstracts painting with geometric that used a carefully selected color pallet. "Caroni, for example, arranges very simplistically, geometric shapes such as square and lines in gray, white, blue and black.