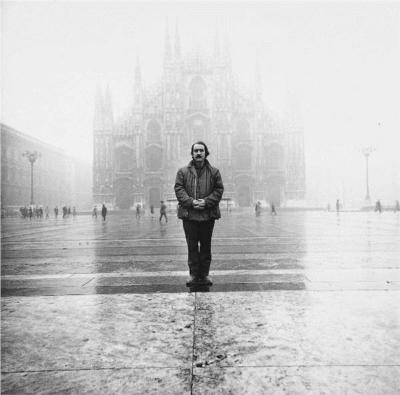 Jean Tinguely (22 May 1925 – 30 August 1991) was a Swiss painter and sculptor. He is best known for his sculptural machines or kinetic art, in the Dada tradition; known officially as metamechanics. Tinguely's art satirized the mindless overproduction of material goods in advanced industrial society.

Born in Fribourg, Tinguely grew up in Basel, but moved to France in 1952 with his first wife, Swiss artist Eva Aeppli, to pursue a career in art. He belonged to the Parisian avantgarde in the mid-twentieth century and was one of the artists who signed the New Realist's manifesto (Nouveau réalisme) in 1960.

His best-known work, a self-destroying sculpture titled Homage to New York (1960), only partially self-destructed at the Museum of Modern Art, New York City, although his later work, Study for an End of the World No. 2 (1962), detonated successfully in front of an audience gathered in the desert outside Las Vegas.

Tinguely married fellow Swiss artist Eva Aeppli in 1951. In 1971, Tinguely married his second wife, Niki de Saint Phalle with whom he collaborated on several artistic projects such as the Hon-en-Katedrall or The Cyclop.

Jean Tinguely died in 1991 at the age of 66 years in the Bern Hospital after a heart illness.

Hon-en-Katedrall (sometimes spelled "Hon-en-Katedral") was an art installation that was shown at Moderna Museet in Stockholm in 1966. The exhibition consisted of a sculpture of a colorful pregnant woman lying on her back with her legs wide apart. The sculpture was 25–26 meters long, about 6 meters high and 11 meters wide. It was built of scaffolding and chicken wire covered with fabric and fiberglass, painted with brightly-coloured poster paint. Through a door-sized entry in the location of the woman's vagina, visitors could go into the sculpture. Inside was a screen showing Greta Garbo films, a goldfish pond and a soft drink vending machine. Johann Sebastian Bach's organ music played through speakers. The exhibition was created by Niki de Saint-Phalle, Tinguely and Per Olof Ultvedt. It had 80,000 visitors during the exhibition period from June 4 to September 9, 1966.

Prominent kinetic sculptor Arthur Ganson described Tinguely as his "primary spiritual artistic mentor", and paid homage to him in his work "Tinguely in Moscow".