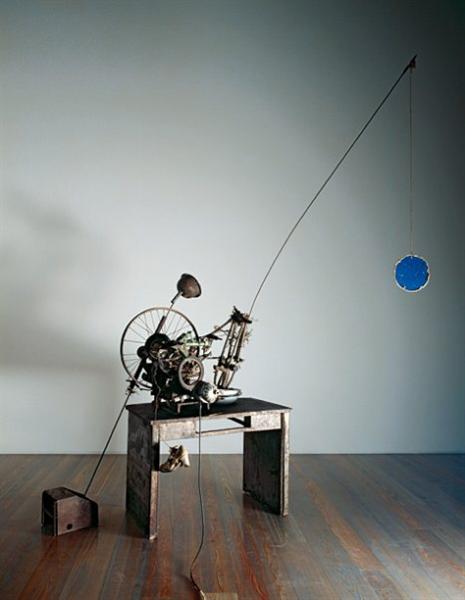 In “Le Soulier de Madame Lacasse“ Tinguely plays pranks with the machine and its mechanics, showing traits not normally connected with them: random and absurd activities. Moreover, he juxtaposes here utterly disparate objects in new relationships and reanimates them by means of violent movements, making them seem alien to the viewer but at the same time drawing his attention to these normally unremarkable things.

Instead of a pedestal, a rusty iron table serves as base. Atop it the artist sets an elaborate construction made of wheels, V-belts and axes, which, driven by an electric motor, moves parts of a motorcycle yawing and clamouring up and down. Tinguely’s “Soulier de Madame Lacasse“ is an anti-machine that wastes its energy on an optical and acoustic spectacle instead of putting it into productive work.

When the motor is switched on, a worn-out shoe that once belonged to Madame Lacasse, the wife of a Belgian artist who, like Tinguely, had his studio in the Impasse Ronsin in Paris, is catapulted through the air accompanied by the deafening noise of the machine. On another long iron wire flaps an ultramarine cardboard panel from Tinguely’s artist friend Yves Klein, who wanted to revolutionise the world with the deep blue colour he had developed.