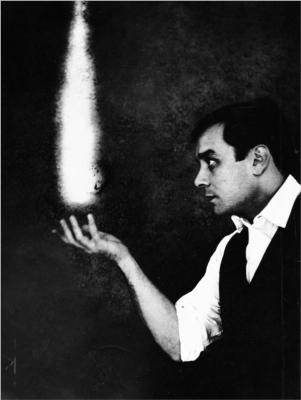 The Dream of Fire - Yves Klein

Yves Klein (French pronunciation: ​[iv klɛ̃]; 28 April 1928 – 6 June 1962) was a French artist considered an important figure in post-war European art. He was a leading member of the French artistic movement of Nouveau réalisme founded in 1960 by art critic Pierre Restany. Klein was a pioneer in the development of performance art, and is seen as an inspiration to and as a forerunner of minimal art, as well as pop art.

Klein was born in Nice, in the Alpes-Maritimes department of France. His parents, Fred Klein and Marie Raymond, were both painters. His father painted in a loose post-impressionist style, while his mother was a leading figure in Art informel, and held regular soirées with other leading practitioners of this Parisian abstract movement.

From 1942 to 1946, Klein studied at the École Nationale de la Marine Marchande and the École Nationale des Langues Orientales and began practicing judo. At this time, he became friends with Arman (Armand Fernandez) and Claude Pascal and started to paint. At the age of nineteen, Klein and his friends lay on a beach in the south of France, and divided the world between themselves; Arman chose the earth, Pascal, words, while Klein chose the ethereal space surrounding the planet, which he then proceeded to sign:

Between 1947 and 1948, Klein conceived his Monotone Symphony (1949, formally Monotone Silence Symphony) that consisted of a single 20-minute sustained chord followed by a 20-minute silence—a precedent to both La Monte Young's drone music and John Cage's 4′33″. During the years 1948 to 1952, he traveled to Italy, Great Britain, Spain, and Japan. In Japan, at the age of 25, he became a master at judo receiving the rank of yodan (4th dan/degree black-belt) from the Kodokan, which at that time was a remarkable achievement for a westerner. He also stayed in Japan in 1953. Klein later wrote a book on judo called Les Fondements du judo. In 1954, Klein settled permanently in Paris and began in earnest to establish himself in the art world.

Although Klein had painted monochromes as early as 1949, and held the first private exhibition of this work in 1950, his first public showing was the publication of the artist's book Yves Peintures in November 1954. Parodying a traditional catalogue raisonné, the book featured a series of intense monochromes linked to various cities he had lived in during the previous years. Yves Peintures anticipated his first two shows of oil paintings, at the Club des Solitaires, Paris, October 1955 and Yves: Proposition monochromes at Gallery Colette Allendy, February 1956. Public responses to these shows, which displayed orange, yellow, red, pink and blue monochromes, deeply disappointed Klein, as people went from painting to painting, linking them together as a sort of mosaic.

The next exhibition, 'Proposte Monocrome, Epoca Blu' (Proposition Monochrome; Blue Epoch) at the Gallery Apollinaire, Milan, (January 1957), featured 11 identical blue canvases, using ultramarine pigment suspended in a synthetic resin 'Rhodopas', described by Klein as "The Medium". Discovered with the help of Edouard Adam, a Parisian paint dealer, the optical effect retained the brilliance of the pigment which, when suspended in linseed oil, tended to become dull. Klein later deposited a Soleau envelope for this recipe to maintain the "authenticity of the pure idea." This colour, reminiscent of the lapis lazuli used to paint the Madonna's robes in medieval paintings, was to become known as International Klein Blue (IKB). The paintings were attached to poles placed 20 cm away from the walls to increase their spatial ambiguities.