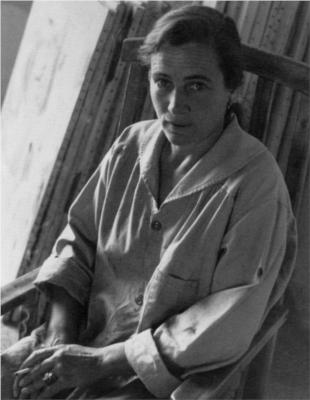 Agnes Bernice Martin was a Canadian-born American abstract painter, often referred to as a minimalist; Martin considered herself an abstract expressionist. She won a National Medal of Arts from the National Endowment for the Arts in 1998.

Agnes Bernice Martin (March 22, 1912 – December 16, 2004), born in Canada, was an American abstract painter. Her work has been defined as an "essay in discretion on inward-ness and silence". Although she is often considered or referred to as a minimalist, Martin considered herself an abstract expressionist.

She was awarded a National Medal of Arts from the National Endowment for the Arts in 1998.

Agnes Bernice Martin was born in 1912 to Scottish Presbyterian farmers in Macklin, Saskatchewan, one of four children. From 1919, she grew up in Vancouver. She moved to the United States in 1931 to help her pregnant sister, Mirabell, in Bellingham, Washington. She preferred American higher education and became an American citizen in 1950. Martin studied at Western Washington University College of Education, Bellingham, Washington, prior to receiving her B.A. (1942) from Teachers College, Columbia University. In 1947 she attended the Summer Field School of the University of New Mexico in Taos, New Mexico. After hearing lectures by the Zen Buddhist scholar D. T. Suzuki at Columbia, she became interested in Asian thought, not as a religious discipline, but as a code of ethics, a practical how-to for getting through life. A few years following graduation, Martin matriculated at the University of New Mexico, Albuquerque, where she also taught art courses before returning to Columbia University to earn her M.A. (1952). She moved to New York City in 1957 and lived in a loft in Coenties Slip in lower Manhattan. She left New York City in 1967, disappearing from the art world to live alone. After eighteen months on the road, Martin settled in Cuba, New Mexico (1968-1977), and then Galisteo, New Mexico (1977-1993). She built an adobe home for herself in each location. She lived alone all her adult life. In 1993 she moved to a retirement residence in Taos, New Mexico, where she lived until her death in 2004.

She was publicly known to have schizophrenia, once opting for electric shock therapy for treatment.

Many of her paintings bear very positive names such as “Happy Holiday” (1999) and “I Love the Whole World” (2000). In an interview in 1989, discussing her life and her painting, Agnes Martin said, "Beauty and perfection are the same. They never occur without happiness."

A pioneer of her time, Agnes Martin never publicly expressed her sexuality, but has been described as a 'closeted homosexual' (sic). She often employed an intersectional feminist lens when she critiqued fellow artists' work. Jaleh Mansoor, an art historian, states that Martin was "too engaged in a feminist relation to practice, perhaps, to objectify and label it as such".

Her work is most closely associated with Taos, with some of her early work visibly inspired by the desert environment of New Mexico. She moved to New York City after being discovered by the artist/gallery owner Betty Parsons in 1957. That year, she settled in Coenties Slip in lower Manhattan, where her friends and neighbors, several of whom were also affiliated with Parsons, included Robert Indiana, Ellsworth Kelly, and Jack Youngerman. Barnett Newman actively promoted Martin's work, and helped install Martin's exhibitions at Betty Parsons Gallery beginning in the late 1950's. Another close friend and mentor was Ad Reinhardt. In 1961 Martin contributed a brief introduction to a brochure for her friend Lenore Tawney's first solo exhibition, the only occasion on which she wrote on the work of a fellow artist. In 1967, Reinhardt died and the studio at Coenties Slip was slated for demolition. After Martin left New York, she drove about the western US and Canada, deciding to settle in Cuba, New Mexico for a few years (1968-1977), then settled in Galisteo, New Mexico (1977-1993). In both New Mexico homes, she built adobe brick structures herself. She did not paint for seven years and consciously distanced herself from the social life and social events that brought other artists into the public eye. She collaborated with architect Bill Katz in 1974 on a log cabin she would use as her studio. That same year, she completed a group of new paintings and from 1975 they were exhibited regularly.