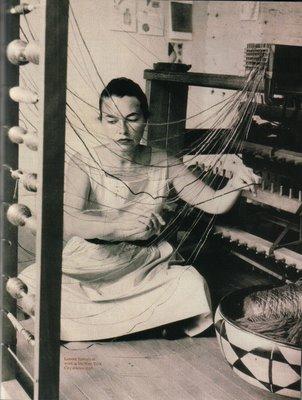 Lenore Tawney (born Leonora Agnes Gallagher; May 10, 1907 – September 24, 2007) was an American artist who became an influential figure in the development of fiber art.

One of five children born in Lorain, Ohio to Irish American parents, Tawney's introduction to the tenets of the German Bauhaus school and the artistic avant-garde began in 1946 when she attended László Moholy-Nagy's Chicago Institute of Design. She left home at age 20 and worked in Chicago while taking night courses at the Art Institute of Chicago.

During that time she met George Tawney; their marriage only lasted eighteen months. After his death, she to moved to Urbana, to be near his family and enrolled at the University of Illinois to study art. Tawney later studied with Moholy-Nagy, cubist sculptor Alexander Archipenko and abstract expressionist painter Emerson Woelffer, among others, and in 1949, she studied weaving with Marli Ehrman. In 1954, she studied with the distinguished Finnish weaver Martta Taipale at Penland School of Crafts and began working tapestry and introduced a new pallette into her work.

In 1957, she moved to New York City, where she became associated with a generation of artists including Ellsworth Kelly, Robert Indiana, Agnes Martin and Jack Youngerman. In the 1960s Tawney created drawings, postcard collages, and college and box forms and she combined collage and woven works.

After 1977 she "...developed a series of architecturally scaled 'clouds', composed of thousands of shimmering linen threads suspended from canvas supports..." Beginning in the late 1950s, Tawney lived and worked mainly in New York City, where she died, aged 100. “The first hundred years”, she said with a smile on her hundredth birthday, “were the hardest.”

Widely known in the New York art world and beyond, she was the veteran of more than two dozen solo exhibitions in leading galleries and museums and she participated in dozens of important group exhibitions. The American Craft Museum (New York City), the Art Institute of Chicago, the Cleveland Museum of Art, the Honolulu Museum of Art, the Metropolitan Museum of Art, the Neuberger Museum of Art (Purchase, New York), the Renwick Gallery (Washington, D.C.), and the Stedelijk Museum Amsterdam are among the Tawney public collections. Lenore Tawney: A Retrospective: American Craft Museum was published in 1990 by Rizzoli, and Lenore Tawney: Signs on the Wind, Postcard Collages was published by Pomegranate in 2002.

Tawney began weaving in 1954. Her early tapestries combined traditional with experimental, using an ancient Peruvian gauze weave technique and inlayed colorful yarns to create a painterly effect that appeared to float in space. Because of her unorthodox weaving methods, Tawney was spurned by both the craft and art worlds, but her distinct style attracted many devoted admirers. She is considered to be a groundbreaking artist for the elevation of craft processes to fine art status, two communities which were previously mutually exclusive.

Tawney's weavings fall into three categories: the solid straight weaving, the open warp weave, and the mesh or screen woven as background for solid areas. Tawney often went beyond traditional definitions of weaving, including needlework to add action to the line of a woven design. Furthering her experimentation, Tawney began creating what she called “woven forms”. These totem-like sculptural weavings abandoned the rectangular format of traditional tapestries, and were suspended from the ceiling off the wall. She sometimes incorporated found objects such as feathers and shells into these pieces.