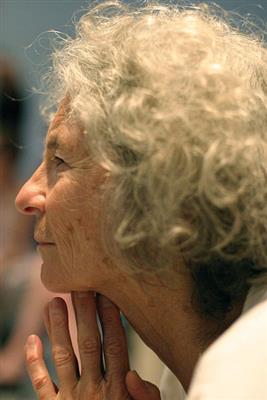 Simone Forti (born March 25, 1935), is an American Italian Postmodern artist, dancer, choreographer, and writer. Since the 1950s, Forti has exhibited, performed, and taught workshops all over the world. Her innovations in Postmodern dance, including her seminal 1961 body of work, Dance Constructions, along with her contribution to the early Fluxus movement, have influenced many notable dancers and artists. Forti first apprenticed with Anna Halprin in the 1950s and has since worked alongside artists and composers Nam June Paik, Steve Paxton, La Monte Young, Trisha Brown, Charlemagne Palestine, Peter Van Riper, Dan Graham, Yoshi Wada, Robert Morris and others. Forti's published books include Handbook in Motion (1974, The Press of the Nova Scotia College of Art and Design), Angel (1978, self-published), and Oh Tongue (2003, Beyond Baroque Foundation, ed. Fred Dewey). She is currently represented by The Box L.A. in Los Angeles, CA, and has works in the permanent collections of the Museum of Modern Art (MOMA) in New York, the Stedelijk Museum in Amsterdam, the Generali Foundation in Vienna, the Whitney Museum of American Art in New York, and the Moderna Museet in Stockholm.


Forti was born in Florence, Italy to Jewish parents Milka Forti (née Greunstein) and Mario Forti. In the winter of 1938, the Forti family, including Forti's older sister Anna, left Italy to escape anti-Semitic persecution. The family crossed the northern border into Switzerland, then spent six months in Bern while Milka was ill. When Milka recovered, the family sailed to the United States in early 1939. The Fortis eventually settled in Los Angeles, where Forti attended public schools Gardner Street Elementary School, John Burroughs Middle School and Fairfax Senior High School. After graduating from Fairfax High School in 1953, Forti attended Reed College in Portland, Oregon from 1953 to 1955. In 1955, Forti and her partner, artist Robert Morris, left Reed College and moved to San Francisco, California. The couple married there the same year and Forti began working under the name Simone Morris.


Soon after moving to the Bay Area, Forti enrolled in classes at the Halprin-Lathrop School, co-founded by dancer/choreographer Anna Halprin. When Halprin founded the San Francisco Dancer's Workshop (formerly known as the Dancer's Workshop of Marin) in 1955, Forti followed her to continue studying Halprin's work in Dance Improvisation. Forti studied under Halprin from 1955 to 1959, during which time she contributed to early works by Halprin and around San Francisco, along with other members of the Dancer's Workshop, including A.A. Leath and John Graham. Through the Dancer's Workshop, Forti also taught children's and adult's dance workshops throughout Marin County.


In 1959, Forti moved to New York with Morris. While also working as a nursery school teacher during the day, Forti enrolled in a composition and improvisation class at the Merce Cunningham Studio, taught by educator/musicologist Robert Ellis Dunn. These classes introduced Forti to the work of John Cage and she met and began working with dancers that became influential in the field of Postmodern dance, including Trisha Brown, Yvonne Rainer and Steve Paxton.