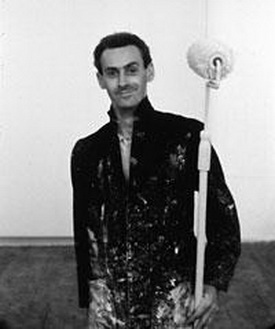 Yves Gaucher (January 3, 1934 – September 8, 2000) was a Canadian abstract painter and printmaker. He became a member of the Order of Canada in 1981, and is considered the leader amongst Quebec's printmakers in the 1950s and 60s. His work has been featured in multiple important galleries, including the National Gallery of Canada in Ottawa, the Museum of Modern Art in New York City, and the Victoria and Albert Museum in London.

Yves Gaucher was born on January 3, 1934 in Montreal to Tancrède Gaucher, a pharmacist and optician, and Laura Élie Gaucher, as the sixth of eight children.

He attended the Collège Brébeuf in Montreal in 1948, but was expelled for drawing immoral pictures. These pictures were in fact copied from his textbooks on Ancient Greek and Egyptian art. A year after his expulsion he switched to an English-language Protestant school, Sir George Williams College and it was there that he took his first art course.

Music was very important to Gaucher. Raised in a musical home, where everyone played an instrument, Gaucher took up the trumpet at age twelve. His first full-time job was with the CBC, where he started in the mailroom. His ambition, however, was to become a radio announcer with his own jazz program. In the meantime he played gigs at night, and also organized a few jam sessions in 1955–56 at Galerie L’Actuelle, founded by Guido Molinari.

After the CBC he then went on to become an employee of the Canadian Pacific Steamship Line, working in its Montreal and Halifax offices.

After meeting Arthur Lismer, a Group of Seven artist, Gaucher decided to study art seriously. He enrolled at the École des Beaux-Arts in Montreal in 1954, but was expelled in 1956 for taking only the courses he was interested in. After his expulsion, he continued to study art on his own, while earning an income through various jobs. Gaucher then returned to the École to study printmaking with Albert Dumouchel, where he created a controversial technique of heavy embossing. When met with criticism, he described his technique as a way of challenging the traditional "taboos".

Gaucher's art career began when he set up an exhibition at the Galerie d'Échange in Montreal in 1957. He enjoyed success afterwards, and as a result became the founding president of Associations des Peintures-Gravures de Montreal in 1960.

In 1962, Gaucher travelled to Europe on a grant from the Canada Council. There, in Paris, he encountered the music of Anton Webern, which became a major influence on him. In his artworks, he began to incorporate more irregular geometries as opposed to strictly geometric forms, as well as greater contrasts of colour. This, he felt, would better represent the atonality of Webern's music.

Gaucher's prints of the late 1950s and early 1960s were technically innovative and demonstrated extensive experimentation with relief and lamination, and have been described as delighting in "material physicality."

By 1964, however, Gaucher began to focus on painting instead of printmaking. A major influence in his early paintings was the style of artists such as Barnett Newman and Mark Rothko, part of an art school known as the New York Modernists. This led him to create similar works which emulated the structure of modernist art. Some of the characteristics of the artwork he produced in this period include the use of regular geometric objects and flat panels of colour on unusually large canvases. He also created art using mathematical relationships, including symmetry, patterning, and spatial relationships, which eventually led to monochromatic works.