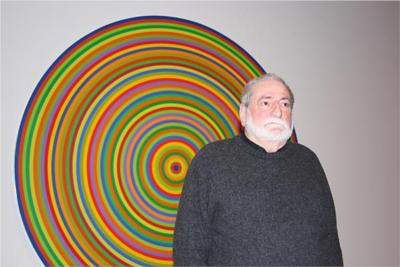 Claude Tousignant, OC (born December 23, 1932 in Montreal, Quebec) is a Canadian artist. Tousignant is considered to be an important contributor to the development of geometric abstraction in Canada.

Claude Tousignant was born on December 23, 1932 in Montreal, Quebec. From 1948 to 1951, he attended the School of Art and Design at the Montreal Museum of Fine Arts where he studied under Arthur Lismer, Louis Archambault, Marian Scott, Jacques de Tounnancour and Gordon Webber. He then travelled to Paris where he studied at the Académie Ranson. returning to Montreal in the spring of 1952.

Tousignant is considered a member of the second generation of the modern art movement in Montreal called "les Plasticiens". This group of four painters (Jean-Paul Jérôme, Louis Belzile, Rodolphe de Repentigny and Fernand Toupin) felt painting should be pure form and colour; meaning and spontaneous expression were to be avoided. In 1962, Tousignant introduced the form of the circle, which would become his signature motif, into his geometric paintings.