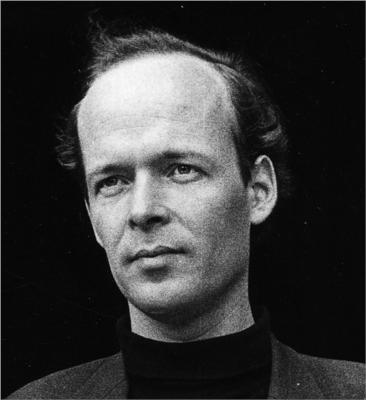 Gerhard von Graevenitz (September 19, 1934 Schilde, Prignitz/Mark Brandenburg – August 20, 1983, Habkern/Traubachtal) was a German kinetic artist, co-founding member of the Nouvelle Tendance and member of the op-art movement. He also belonged to the international circle of the Zero-Group. He is seen as one of the uncompromising representatives of the constructive-concrete art of the younger generation (since 1958).

Gerhard von Graevenitz' father was head of a district council ('Landrat'). As the youngest of four brothers (he had a twin sister), he studied economics at the University of Frankfurt (1955–1956), and at the Academy of Fine Arts, Munich (1956–1961). His professor there was Ernst Geitlinger. Together with Jürgen Morschel he edited the magazine nota, which appeared in four numbers (1959–1960) and was dedicated to international art and concrete poetry. Both started the gallery nota in Munich (1960/1961), showing solo-exhibitions of Otto Piene, Heinz Mack, Almir Mavignier and François Morellet. They organized lectures, e.g. by the information-theorist Max Bense. In 1961, von Graevenitz lived in Paris, where he was in contact with the Groupe de Recherche d'Art Visuel (GRAV) and shared a studio with Julio Le Parc. In 1962 he was co-founder of the international movement Nouvelle Tendance (new tendencies, Neue Tendenzen). Until the group's break-up in 1965, he was one of the four organizers of the international group-shows, operating from Munich. The first solo-exhibition of his work was organized in 1962 at Gallery Roepcke in Wiesbaden. He participated in exhibitions such as "the Responsive Eye" (1965) MOMA, New York and "Licht-Kunst-Licht" (1966) at Van Abbemuseum /Eindhoven. In 1970 he settled in Amsterdam. In the 1970s, he repeatedly worked as an independent organizer and curator of exhibitions, such as for the Dutch Pavilion of the Venice Biennale ("To do with nature", 1978 ), for the Kölnische Kunstverein ("Kunst < > Natur", 1980 ) and for the Hayward Gallery in London (1980, assisted by Norman Dilworth ) and the Kröller-Müller Museum in Otterlo (1980) : "pier + ocean, Reflections on Construction in the 70's". In 1976 he co-founded the Internationales Künstlergremium and worked for it as its vice-president in 1978/79. From 1979 on he was a member of the board of Stichting de Appel in Amsterdam.

In 1958, after initial painterly experiments with material, he began his white monochrome reliefs ("White Structures") with concave and/or convex points or circles, showing structures as progressions, degressions and chance constellations on a grid. In 1961, he created his first kinetic object, and, from 1963 onwards, light-objects, He installed his light-wall in 1966 (which was shown in London, Eindhoven and in 1969 at the Venice Biennale ). He constructed "play-objects", some of them meant as models for multiples, and in 1962 he made serigraphics in many series, investigating non-hierarchical fields on the basis of chance-operations similar to his first kinetic objects . From 1972 onwards he used the possibilities of a chance-generator for computer-graphics, aided by the mathematician Rolf Wölk. For some years from 1968 his large kinetic wall hung in the foyer of the Gemeentemuseum Den Haag. In 1968 he participated in documenta 4 in Kassel with three large kinetic objects. In the 1970s he installed kinetic environments in Nürnberg (1969), Milan (1973) and Amsterdam (1977).