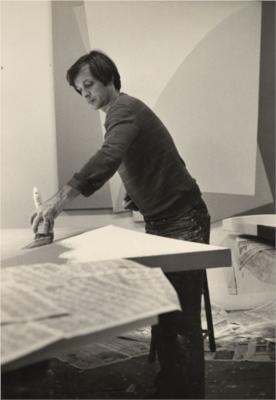 Charles Hinman was born in 1932, in Syracuse, New York. He initiated his artistic education at the Syracuse Museum of Fine Arts, now the Everson Museum of Art, where he attended classes. He went on to complete his BFA in 1955 at Syracuse University. Alongside his artistic talent, Charles Hinman was also dedicated to sports. While studying at university he was a professional baseball player for the Milwaukee Braves in the minor league. He moved to New York to study at the Arts Student League before serving two years in the army. Upon his return he was a mechanical drawing teacher at the Staten Island Academy from 1960 to 1962 and a carpentry shop instructor at the Woodmere Academy on Long Island.

In the early 1960s Hinman lived on Coenties Slip in Lower Manhattan where he shared an abandoned sail-making loft with James Rosenquist. It was an ideal art studio offering large open spaces to work at an affordable rent. Along with Robert Indiana, Ellsworth Kelly, Jack Youngerman and Agnes Martin who resided in the neighbouring buildings, they formed a small artistic community away from the Upper-East side and the Abstract Expressionists from whom they wished to differentiate themselves. They did not constitute an art movement as such, but rather a "support and critique family that helped each other go on their individual paths." Throughout the 1960s they produced works that prefigured Pop, Minimal and Feminist Art. In 1965, Charles Hinman and Robert Indiana left Coenties Slip for the Bowery where they shared a building at 2 Spring Street. In 1971, he moved a block away on the Bowery where he settled in an 8000 sq/ft studio where he has remained ever since. Below Hinman's studio was that of Tom Wesselmann and above worked Will Insley, across the street were the studios of Adolph Gottlieb and Roy Lichtenstein. In 2002, the New Museum became his neighbor when it was built on the adjacent lot.

In the 1960s Charles Hinman played a significant role in redefining the physical shape of paintings. The shaped canvas was born from the desire to break away from the traditional square or rectangular frame of painting. Rather than a formalized medium or window that contained the subject, the contours of the painting became part of the subject itself. In the mid-1960s several abstract minimalist painters were experimenting with its possibilities, the most famous of which is Frank Stella. Charles Hinman drove the concept further by pushing the canvas out from the wall; his works were a form of hybrid between painting and sculpture. This type of painting is known as a three-dimensional shaped canvas. As early as 1963-64 Charles Hinman created sculptural paintings with protruding geometric and undulating forms. While Sven Lukin and Richard Smith were also experimenting with the use of the three-dimensional canvas around the same time, Charles Hinman's defining particularity was his focus on the illusion of space and subtly suggested volume, embracing the use of color, shadow and reflection. He was influenced by Ellsworth Kelly in his flat and contrasting Hard-edge use of color but with the objective of generating and accentuating a perception of volume. In the subsequent years until the early 1970s, Hinman examined the possibilities offered by this new medium: strongly protruding canvases, geometric and sensual profiles, color contrasts, color reflections on the adjacent wall, shadows, monochrome canvases.