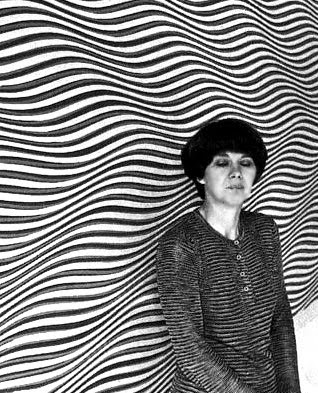 Bridget Louise Riley CH CBE is an English painter who is one of the foremost proponents of Op art. She currently lives and works in London, Cornwall, and France.

Bridget Louise Riley CH CBE (born 24 April 1931) is an English painter who is one of the foremost exponents of Op art. She currently lives and works in London, Cornwall and the Vaucluse in France.

Riley was born in Norwood, London in 1931. Her grandfather was an Army officer. Her father, John Fisher Riley, originally from Yorkshire, was a printer and owned his own business. In 1938 he relocated the printing business, together with his family, to Lincolnshire.

At the beginning of World War II Riley's father was called up into the army and Bridget Riley, together with her mother and sister Sally, moved to a cottage in Cornwall. The cottage, not far from the sea near Padstow, was shared with an aunt who was a former student at Goldsmiths' College, London. Primary education came in the form of irregular talks and lectures by non-qualified or retired teachers. She attended Cheltenham Ladies' College (1946–1948) and then studied art at Goldsmiths College (1949–52), and later at the Royal College of Art (1952–55). There her fellow students included artists Peter Blake, Geoffrey Harcourt (the retired painter, also noted for his many well known chair designs) and Frank Auerbach. In 1955 Riley graduated with a BA degree.

Between 1956 and 1958 she nursed her father, who had been involved in a serious car crash. She suffered a breakdown due to the deterioration of her father's health. After this she worked in a glassware shop. She eventually joined the J. Walter Thompson advertising agency, as an illustrator, where she worked part-time until 1962. The large Whitechapel Gallery exhibition of Jackson Pollock, in the winter of 1958, was to have a major impact on her.

Her early work was figurative with a semi-impressionist style. Between 1958 and 1959 her work at the advertising agency showed her adoption of a style of painting based on the pointillist technique. Around 1960 she began to develop her signature Op Art style consisting of black and white geometric patterns that explore the dynamism of sight and produce a disorienting effect on the eye and produces movement and color. In the summer of 1960 she toured Italy with mentor Maurice de Sausmarez, and the two visited the Venice Biennale with its large exhibition of Futurist works.

In 1961, with partner Peter Sedgley, she visited the Vaucluse plateau in the South of France, and acquired a derelict farm which would eventually be transformed into a studio. Back in London, in the spring of 1962, Riley was given her first solo exhibition, by Victor Musgrave of Studio One.

In 1968 Riley, with Peter Sedgley and the journalist Peter Townsend, created the artists' organisation SPACE (Space Provision Artistic Cultural and Educational), with the goal of providing artists large and affordable studio space.