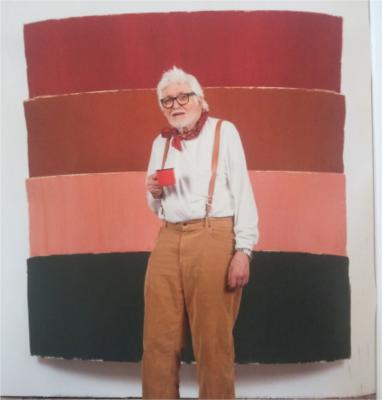 Ron Gorchov (born 1930) is an American artist. In the late 1960s, he began making oil-on-linen paintings on distinctive saddle-like stretchers, at once concave and convex, featuring one or two biomorphic shapes against differently colored backgrounds. These, along with the multi-paneled, "stacked" paintings, which Gorchov began making in the early 1970s, are to this day the primary support structure for the artist's work. Bridging sculpture and abstract painting, Gorchov's singular artistic vocabulary challenged the methodologies of traditional painting.

Ron Gorchov was born in 1930 in Chicago, Illinois. In 1944, at the age of fourteen, he was invited to take Saturday classes at the Art Institute of Chicago. Many of his fellow students, who were servicemen returning from World War II, used G.I. Bill benefits to pay for art materials. "A veteran named Jered Hoffman gave me a paper bag with all his half-squeezed oil paint tubes and a whole bunch of old brushes and he said they'd be good luck".

In 1953, Gorchov moved to New York with his wife Joy Gorchov Tomme and newborn son, Michael. The family moved into the Marlton Hotel, across the street from where the old location of the Whitney Museum, and what is now the New York Studio School. In the late 1950s, Gorchov developed a close friendship with John Graham, himself an important influence on such artists as Arshile Gorky, Richard Smith, and Jackson Pollock. He also became acquainted with members of this generation of artists largely tied with the Abstract Expressionism movement, including Mark Rothko, Willem de Kooning, and Al Held, among others.

Gorchov's break-through on the New York art scene came in 1960, as part of the Whitney Museum's Young America 1960: Thirty American Painters Under ThirtySix. The same year, Gorchov had his first show with Tibor de Nagy Gallery, followed by two more solo shows in 1963 and 1966.

Gorchov became a strong artistic force in the late 1960s and early 70s within a group of Manhattan-based abstract artists, such as Frank Stella, Richard Tuttle, Blinky Palermo and Ellsworth Kelly, who rejected the ubiquitous rectangular canvas in favour of new shapes and configurations.