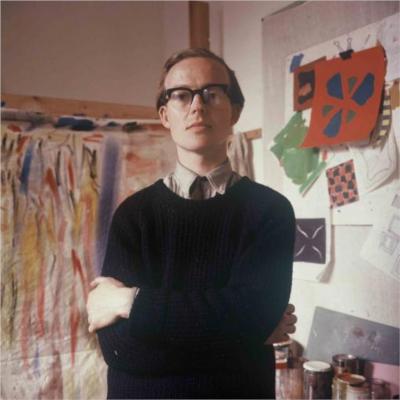 Jeremy Moon was a British abstract painter born in Altrincham, Cheshire in 1934. He read law at Cambridge University and worked in advertising before becoming an artist in 1961. He lived and worked in Kingston upon Thames, Surrey between 1966 and 1973. He died following a motorcycle accident near Kingston in November 1973.

Jeremy Moon was born in Altrincham, Cheshire in 1934.

From around 1959, Moon had been experimenting with ballet, choreography, poetry and painting alongside his day-job in advertising. He visited the second Situation exhibition at the Whitechapel Gallery in 1961, a survey of new large-scale abstract painting in Britain, and soon after decided he wanted to become an artist. He enrolled at Central School of Art but left shortly after starting, feeling that his own working practice and ideas were already established. In 1962, Moon won The Associated Electrical Industries Prize for Sculpture, a competition that was judged by his friend Phillip King, the British sculptor. At this time he was living and working in Chepstow Road, West London and had his first solo show at the nascent Rowan Gallery in Knightsbridge. (The painter Bryan Young had recommended Moon's work to the gallery's owner Alec Gregory-Hood). Moon also married Elizabeth Bryant and started teaching part-time at St Martin's School of Art and Chelsea School of Art within the same year. In 1964 they moved to a 2-bedroom flat in Swiss Cottage and Moon used one room as a studio. Son Robert was born that year. In 1966 they bought a house in Kingston upon Thames, Surrey and during the following year Moon built a large studio in the back garden, taking a lead from John Hoyland who had moved to Kingston and built a studio shortly beforehand. (Painters Bernard Cohen and John Edwards also followed suit). Second son Benedick was born in 1966. The first works completed in the new Kingston studio in 1967 were the Y-shaped paintings. Daughter Georgina was born in 1970. Moon died following a motorcycle accident at Robin Hood roundabout on the A3 whilst commuting back from Chelsea to Kingston on 30 November 1973.

Jeremy Moon became a leading figure in British art during the 1960s and 1970s. His work was abstract and geometric in form. His early paintings until 1964 used oil on canvas, switching then to the new acrylic paints. He generally applied paint in a flat and unmodulated way using masking tape to delineate clear areas of colour. He was an early exponent of the shaped canvas and also produced a small number of 3D and relief works. Reoccurring motifs and elements within his paintings included grid-like forms composed of vertical, horizontal or diagonal lines. Drawing was a central part of his practice and he used pencil, pen and pastels incessantly on A4 letter-writing paper to develop ideas for works. His peers included John Hoyland, Bridget Riley, Ian Stephenson, Bernard Cohen, Patrick Caulfield, Phillip King and Anthony Caro.