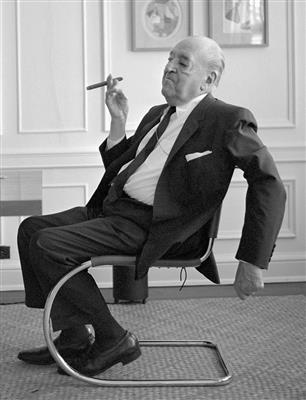 Ludwig Mies van der Rohe (/miːs/ MEESS; German: [miːs]; born Maria Ludwig Michael Mies; March 27, 1886 – August 17, 1969) was a German-American architect. He was commonly referred to as Mies, his surname. Along with Alvar Aalto, Le Corbusier, Walter Gropius and Frank Lloyd Wright, he is regarded as one of the pioneers of modernist architecture.


Mies was the last director of the Bauhaus, a seminal school in modern architecture. After Nazism's rise to power, with its strong opposition to modernism (leading to the closing of the Bauhaus itself), Mies emigrated to the United States. He accepted the position to head the architecture school at the Armour Institute of Technology (later the Illinois Institute of Technology), in Chicago.


Mies sought to establish his own particular architectural style that could represent modern times just as Classical and Gothic did for their own eras. He created his own twentieth-century architectural style, stated with extreme clarity and simplicity. His mature buildings made use of modern materials such as industrial steel and plate glass to define interior spaces, as also conducted by other modernist architects in the 1920s and 1930s such as Richard Neutra. Mies strove toward an architecture with a minimal framework of structural order balanced against the implied freedom of unobstructed free-flowing open space. He called his buildings "skin and bones" architecture. He sought an objective approach that would guide the creative process of architectural design, but was always concerned with expressing the spirit of the modern era. He is often associated with his fondness for the aphorisms, "less is more" and "God is in the details".


Mies was born March 27, 1886 in Aachen, Germany. He worked in his father's stone carving shop and at several local design firms before he moved to Berlin, where he joined the office of interior designer Bruno Paul. He began his architectural career as an apprentice at the studio of Peter Behrens from 1908 to 1912, where he was exposed to the current design theories and to progressive German culture. He worked alongside Le Corbusier and Walter Gropius, who was later also involved in the development of the Bauhaus. Mies served as construction manager of the Embassy of the German Empire in Saint Petersburg under Behrens.


Ludwig Mies renamed himself as part of his transformation from a tradesman's son to an architect working with Berlin's cultural elite, adding "van der" and his mother's maiden name "Rohe" (the word mies means "lousy" in German) and using the Dutch "van der", because the German form "von" was a nobiliary particle legally restricted to those of genuine aristocratic lineage. He began his independent professional career designing upper-class homes.