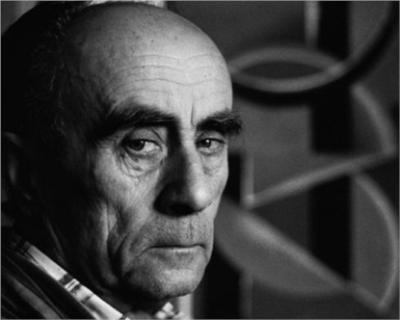 Lajos Kassák (March 21, 1887, Érsekújvár – July 22, 1967, Budapest) was a Hungarian poet, novelist, painter, essayist, editor, theoretician of the avant-garde, and occasional translator. He was among the first genuine working-class writers in Hungarian literature. Self-taught, he became a writer within the socialist movement and published journals important to the radical intellectual culture of Budapest in the early 1900s.

Although he cannot be fully identified with any single avant-garde movement, he adopted elements of expressionism, futurism and dadaism.

Lajos Kassák was born in Nové Zámky in present-day Slovakia. His father was an apothecary assistant and his mother a laundress. Although his parents wanted him to attend higher education, he decided to quit his studies and started work as a locksmith assistant, gaining a letter of indenture as an apprentice.

In 1904 Kassák moved to Budapest, where he worked in a factory on the outskirts of the city. He participated in the labor union movement, and organized several strikes. In 1905 he was fired several times for organizing strikes.

In 1907 he left for Paris - on foot and without any money; the city was attracting artists and intellectuals from throughout eastern Europe. He was expelled to Hungary in 1910. The experiences of this journey were later covered in his autobiography entitled Egy ember élete (A Man's Life) (published periodically from 1927–1935, and as a book in 1937).

Despite his lack of formal education and inadequate writing skills, Kassák fought fiercely to publish his works. His first poem was published in 1908, and his first collections of short stories in 1912, titled Életsiratás. In 1915 he published his first collection of poems, Éposz Wagner maszkjában (Epic in the Mask of Wagner). That same year, he launched his first journal, entitled A Tett (The Action), which was soon censored and banned for being "pacifist". He was part of the intellectual movement that included the group of painters known as The Eight whose work he supported in his journals. He started Ma (Today) in Budapest, and later published it from Vienna.

During the Hungarian Soviet Republic in 1919, he became a member of the special Writers Directorate. After fierce debates with the republic's leader, Béla Kun, he decided to distance himself from Bolshevism, yet he always remained leftist. He never distinguished between being a socially responsible individual and an artist: his art was part of his self-definition as a "socialist man". After the fall of the Hungarian Soviet Republic, he emigrated to Vienna. There he continued publishing his second journal, Ma (Today).

In 1926, Kassák returned to Hungary. He continued editing and publishing journals such as Munka (Work) (1927–1938) and Dokumentum (Document) (1927), both of which were independent leftist avant-garde journals.

His autobiography, Egy ember élete (A Man's Life) was published in sections periodically in the Hungarian literary journal, Nyugat, between 1923 and 1937. After he published it as a book, he was prosecuted because of its chapters concerning the Hungarian Soviet Republic.

He regularly published in leftist newspapers. From 1945 to 1947, he edited the journal Kortárs (Contemporary), which closed when it was banned. In 1947 he returned to political duties, as the communists had taken over the Hungarian government. He was appointed as the head of the Social Democratic Party's Art Commission. In 1948 he became an MP. A year later he had to change seats in the Parliament, and later he had to resign, and finally retire because of the change of the political climate.