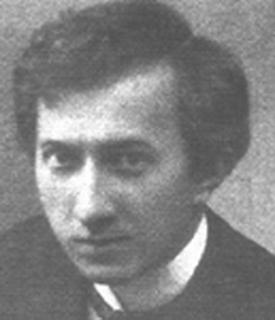 Erich Buchholz (1891–1972) was a German artist in painting and printmaking. He was a central figure in the development of non-objective or concrete art in Berlin between 1918 and 1924. He interrupted his artistic activity in 1925, first because of economic hardship and, from 1933, as he was forbidden to paint by the National-Socialist authorities. He resumed artistic activity in 1945.

Erich Buchholz was born on 31 January 1891 in Bromberg, Province of Posen, Germany (now Bydgoszcz, Poland). He started working as a teacher in a primary school in Berlin, painting in his free time. In 1914 he decided to become a full-time artist and to study painting with Lovis Corinth, but managed to take only one lesson before being conscripted.

At the end of World War I he returned to Berlin and started working on abstract paintings. In 1918 he designed his first abstract stage sets for the Albert-Theater in Dresden. His first solo exhibition was in 1921 at the Galerie Der Sturm in Berlin and included a series of sixteen woodblocks. The first of these, Orbits of the Planets (Planetenbahnen), was initially designed as a matrix for making woodcut prints, but the artist gradually regarded it as a work of art of its own right and painted the surfaces.

Throughout the 1920s he participated in the annual jury-free art exhibitions in Berlin. At the exhibition Constructivism and Suprematism, organized in 1922 by the Van Diemen Gallery in Berlin, he met László Moholy-Nagy, Laszlo Peri, Ernő Kállai, and El Lissitzky, people with whom he kept close contact in the following years. He also participated in international events such as the First Exhibition of Modern Art in Bucharest.

His studio at 15 Herkulesufer in Berlin was a meeting place for artists of the avant-garde, including—besides painters such as Hannah Höch and Kurt Schwitters—Dadaists writers Richard Huelsenbeck and Raoul Hausmann as well as the pioneers of abstract film Hans Richter and Viking Eggeling. Art critic Heinz Ohff described this studio in Buchholz's obituary, stating, "In 1922 he remodeled his studio flat at Herkulesufer 15 into the first 'environment,' the first abstractly designed three-dimensional space in art history." Original photographs of Buchholz’s studio-space design do exist from that period and furthermore he exhibited them in the Grosse Berliner of 1923. The photographs reveal that he had developed it into a coherent abstract space—right down to a model of its ceiling design. The colour of the room in particular was important. A light blue was painted over the smooth surfaces of a fussy wallpaper pattern; a similarly light blue-green covered the rougher surface where wallpaper had been stripped. Both colours tend to lighten and expand the visual impact of a small space. Various motifs on the walls were continuously re-arranged—sometimes the dominant sphere on the wall remains uncovered, sometimes it is in eclipse. This activation of its elements sought to reinforce the mobility experienced when encountering an artwork as a three-dimensional space. A reconstruction of his studio was built and presented in 1969 in the Kunstbibliothek of Berlin, organized and curated by Hans-Peter Heidrich, the director of the Daedulus gallery.