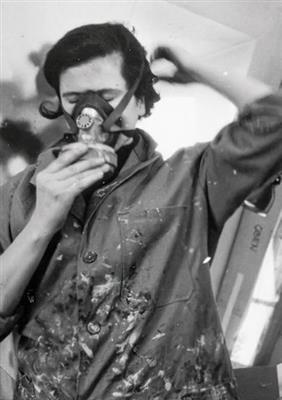 Charlotte Posenenske, née Mayer (1930–1985) was a German artist associated with the minimalist movement who predominately worked in sculpture, but also produced paintings and works on paper.

Posenenske worked in a variety of mediums, her practice becoming more abstract through the course of the 1960s. While other artists of the period worked in multiples, where a finite edition of a work could be produced, Posenenske worked in series, meaning that there was no limit to the editions. Posenenske rejected the commercial art market, offering her work for sale at its material cost. Reconstructions authorised by the artist’s estate are not replicas, and they are outwardly identical to the original prototype. Only the certificate differentiates the unsigned work from other commodities.

In 1968 Posenenske published a statement in the journal Art International referencing the reproducibility of her works, and her desire for the concept and ownership of the piece to be accessible:

Poseneske stopped working as an artist in 1968, no longer believing that art could influence social interaction or draw attention to social inequalities. She retrained as a sociologist and became a specialist in employment and industrial working practices until her death in 1985. During this period of self-imposed exile Posenenske refused to visit any exhibitions, and did not show her work.