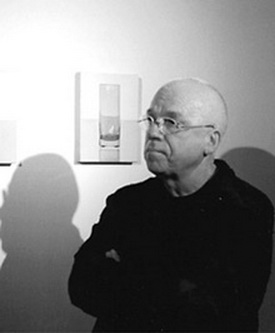 Peter Dreher (born August 26, 1932) is a German artist. As professor emeritus of painting, he has influenced a generation of internationally acclaimed artists, including Anselm Kiefer. Dreher has painted series using landscapes and interiors, flower pieces and skulls. His magnum opus is Tag um Tag guter Tag (Day by Day good Day), a series he started working on in 1974. This work received worldwide recognition and praise. Dreher paints realistic objects with a twist of abstraction. His works of art successfully incorporate deconstructive elements of an object without losing its naturalistic beauty.

Dreher was born in Mannheim, Baden-Württemberg, Germany. When he was 7 years old, he began to draw with determination of becoming an artist. His childhood was deeply affected under the Nazi Regime. When Dreher was 12 years old, his father, a German officer, was killed while fighting in Russia and his house was subsequently destroyed. These traumatic events left Dreher feeling uprooted and painting became a refuge for him, as it allowed him to be disconnected from the outside world. While he was drawing or painting, he was able to be in his own thoughts without interruption.

Dreher felt as if he was living without a home and when he was 29 years old, he decided to build his own house in hope that it would remedy his state of homelessness. Dreher realized that a “home” was not connected to a physical place. Instead, a home is a creation you make through painting, thinking or other actions. He found his home in his magnum opus, the series Day by Day good Day, which he started in 1974 and continues to this day.

In the 1950s, Dreher went to the Academy of Fine Arts, Karlsruhe, when the artistic trend was leaning towards figurative. His trainings were under a number of prominent professors, including Karl Hubbuch and Wilhelm Schnarrenberger, who were part of the Neue Sachlichkeit (New Objectivity) movement, as well as under Erich Heckel, one of the founders of Die Brücke movement. As a student, Dreher also received classical training, where he learned to paint still lifes.

Dreher originally painted still lifes with restrained objectivity but he gradually perceived the objects as paintings instead of objects, which meant he painted for the sake of painting. This approach led him to do different experiments, which would later make him a distinguished artist. He often painted everyday objects, including a nail, scissors, a clock, and landscapes, but it is not merely about reproduction. Rather, he challenges the viewers to see the differences within the familiarity. Dreher explains his approach by citing Japanese artist Hiroshige’s statement that “a beautiful landscape bores him while mediocre and familiar things have the implicit capacity to appear new again and again.”

Dreher is famous mostly for his glass series, Day by Day good Day, but he has also created series using landscapes and interiors, flower pieces and skulls. Kasper König comments that Dreher applies his principle of exploring painting in an objective way. Dreher mentions that he “would like to be a machine,” quoting Andy Warhol, so that he can paint objectively, which he feels is necessary for him to accomplish spiritual meditation and reflection when painting.