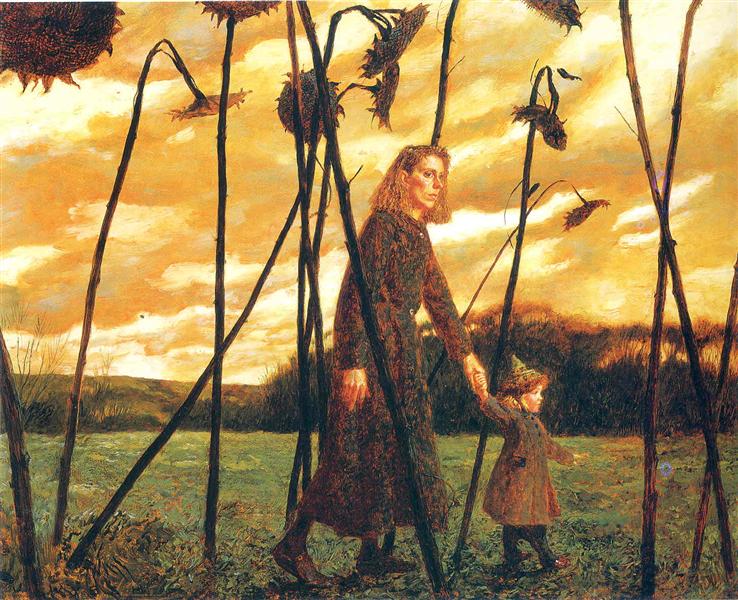 Giuliana and the Sunflowers, 1987 - Jamie Wyeth

The contemporary realism movement is a North American style of painting which came into existence c. 1960s and early 1970s. Featuring a straightforward approach to representation practiced by artists such as Philip Pearlstein, Alex Katz, Jack Beal and Neil Welliver. The movement refers to figurative art works created in a natural yet highly objective style. Today the term Contemporary Realism encompasses all post-1970 sculptors and painters whose discipline is representational art, where the object is to portray the "real" and not the "ideal".

Some Contemporary Realists, like Beal and Rackstraw Downes, began as trained abstract painters. (Abstract Expressionism had been well-established by c. 1960.) Rural artist enclaves (e.g., The Hamptons; areas of Maine) encouraged naturalistic imagery for some. Others shared approaches and methods of Photorealism. Some art schools, notably the Pennsylvania Academy of Fine Arts, have continued to nurture the legacy of 19th-century American Realist painting; Yale has seen a loose, inter-generational network of representational painters over the past few decades. The New York Academy of Art continues to further contemporary figurative art. A number of women artists have been prominently associated with stylistic variants of contemporary realism, including (not limited to) Jane Freilicher, Jane Wilson, Lois Dodd, Janet Fish, Catherine Murphy, Yvonne Jacquette and Martha Mayer Erlebacher.