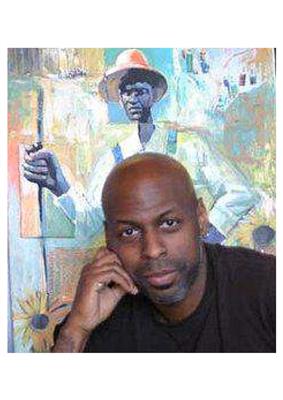 Charly Palmer was born in 1960 in Fayette, Alabama and raised in Milwaukee. He relocated to Chicago to study Art and Design at American Academy of Art and School of the Art Institute. As a graphic designer and illustrator, he has run a successful design studio with a Fortune 500 clientele. As an instructor, he teaches design and illustration and painting at the post-secondary level—most recently—Spelman College. Currently, Palmer devotes his life to his creative goals and has established himself as a fine artist of note.

In his youth, Palmer was fascinated by illustrations in Ezra Jack Keats’ The Snowy Day. “I could never get enough of the imagery in the book,” he says Keats’ work was magical and planted a seed in his young heart. What appealed to him most is the random geometric shapes, the simplicity of layered textures and patterns, and the mix of bold colors. Though inspired by Keats’, Palmer brings unique style and technique to fine art. He creates visual theatre that gleans from history and life experience.

In the recent past, Palmer worked under the pseudonym Carlos—his alter ego. Doing so allowed him to explore and experiment with spontaneity and fluidity. The result is a body of work that is less controlled and more abstract and primal. The fusion of his artistic styles has culminated into the perfect stylistic voice, which is fully expressed in his powerful Civil Rights series.

Charly "Carlos" Palmer (currently known as Charly Palmer) (born June 29, 1960) is an American fine artist. Palmer was born in Fayette, Alabama and raised in Milwaukee, Wisconsin. He attended the School of the Art Institute of Chicago and receiving a degree from the American Academy of Art. He is currently based in Atlanta, Georgia.


Palmer's subjects have included landscapes and portraits. Primarily an acrylic painter, Palmer also works in a variety of media.


He has exhibited at the African American Museum of Southern New Jersey, Just Lookin' Gallery, Spence Gallery, and in many other museums and galleries throughout the country.


Following his mother's death in 2008, Palmer began frequently including flowers in his imagery.


Palmer was the 2018 recipient of the Coretta Scott King/John Steptoe Illustrator Award for the book Mama Africa!: How Miriam Makeba Spread Hope with Her Song, written by Kathryn Erskine.


Since then, Palmer has illustrated for children's books such as The Teachers March! How Selma's Teachers Changed History by Sandra Wallace, My Rainy Day Rocket Ship by Markette Sheppard, There's a Dragon in My Closet by Dorothea Taylor, and I Can Write the World by Joshunda Sanders. He has also done the cover art for the books The Sociology of W. E. B. Du Bois: Racialized Modernity and the Global Color Line by Karida L. Brown and Jose Itzigsohn, Gone Home: Race and Roots Through Appalachia by Karida L. Brown, and All Boys Aren't Blue: A Memoir-Manifesto by George M. Johnson.


Palmer spoke at UCLA in November 2019 as one of the Regents Lecturers for the African American Studies Department about artists impacts on protests.


As a part of the Black Lives Matter movement, Palmer was selected to do the July 2020 cover for the acclaimed Time Magazine for the "America Must Change" issue. Several other illustrations were included in the issue, including portraits of George Stinney and James Baldwin paired with American iconography. The paintings were received as both beautiful and mournful. Palmer was chosen to work on the cover based on his 20 years of experience painting on the subject of race. Also in relation to BLM, Palmer's piece "Speak with Confidence" was posted by celebrities online and gained media attention.


Palmer teaches at Spelman College in Atlanta, Georgia in addition to his working on his original art.