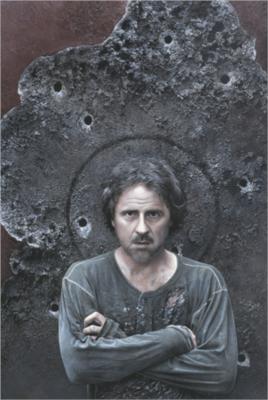 Artist Kent Bellows (June 26, 1949 – September 14, 2005) is best known for his figurative works in the realist style. His artwork is sometimes referred to as “meticulous realism,” a subcategory referring to the artist’s startling attention to detail.

“I see in my mind this mysterious, ethereal museum filled with paintings I haven’t done. That’s what makes the whole trip worthwhile.” — Kent Bellows, 1971.

Kent Bellows was born June 26, 1949, in Blair, Nebraska. As a young boy, Bellows attended Saturday matinees at the Town Theater and became enamored with cinema, an interest that continued throughout his life and was influential to his artwork. He was known in the small community as “that kid who can draw.”

Bellows’ father, a commercial artist and watercolorist, recognized his son’s natural proclivity towards art and taught him what he knew from his own training and experience. In later years, Bellows referred to his father as his “best critic” and “a great influence.” In 1965, Bellows, his parents, and his two younger sisters, moved to Omaha, Nebraska. While attending high school, he earned money selling artwork and playing keyboards with rock-and-roll bands.

Following high school, Bellows studied art history at the local university for two years, while also experimenting with various artistic styles and mediums. During this time, he continued to play keyboards with bands, including a Midwest tour with performers Sonny and Cher.

Making a decision to focus solely on developing his artistic talent, Bellows sought out patrons, in the tradition of the masters, for financial support, including Omaha native, Warren Buffett. Mr. Buffett referred Bellows to his wife, Susie, a lover of the arts. Mrs. Buffett agreed to provide support for one year in exchange for artwork. Out of this relationship developed a lifelong, mutual friendship. In 1970, Bellows resided briefly in Connecticut, and then moved to Berkeley, California, but soon settled back in Omaha, where he remained for the duration of his life.

Bellows’ early works were included in Joslyn Art Museum’s 1970 Midwest Biennial Show as well as other Omaha exhibitions. His early works included abstracts and figurative pieces, some with a Native American theme. Acrylic was his primary medium during this period.

In 1971, Bellows took his first trip to Europe to study the art of the great masters throughout Italy and France.

In 1972, the left-handed Bellows’ ability to work was halted by pain caused by a ganglion cyst that was wound around the tendons of his left wrist. Bellows was referred to the Mayo Clinic, where the cyst was removed in a long and complicated surgery. Bellows soaked his wrist in a therapeutic hot wax bath daily for the rest of his life to treating the remaining wrist pain.

After renting a house with a friend and then living in a patron’s carriage house for a year, Bellows moved into a midtown Omaha apartment, where he lived and worked for the remainder of the decade. He lived there with Elizabeth Irvin, to whom he was married in 1976. Bellows earned a portion of his living during this period through illustration work for publications such as Omni and Rolling Stone, often with a science fiction theme. One such illustration, which appeared in Rolling Stone in 1975, featured science fiction writer Philip K. Dick, who later wrote in a letter to Bellows, “You gave me a reflected self or identity and I suddenly believed I was real…From the moment I saw your picture, I was changed back to my old, real self…you cured me of my identity-less sickness. This is heavy stuff, but true.”