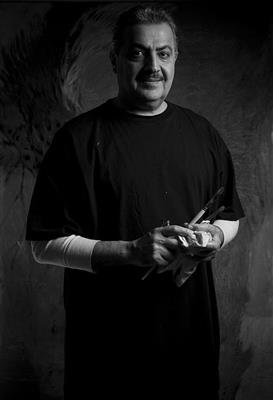 Rashid Al Khalifa was born in Bahrain in 1952. He began painting at the age of 16 and had his first solo exhibition at the Dilmun Hotel, Bahrain (1970). He travelled to the UK in 1972 where he attended the Brighton and Hastings Art College in Sussex and trained in Arts and Design. Back in Bahrain in 1978, he took his cues from European Impressionist masters. He was preoccupied with painting landscapes that exemplified the beautiful luminosity and mysterious spatial effects of the desert.

Sheikh Rashid bin Khalifa Al Khalifa (born 1952 in Manama) is a member of the Bahraini royal family and a painter. He is the first president and the current honorary president of the Bahrain Arts Society. He has painted over a period of 40 years, painting artistic genres such as Realism developed to Impressionism, which gradually evolved to Individualism, a notable prelude to his recent work, a dual concept of Abstract and the colour field. He is often considered to be one of the kingdom's most famous artists.


Sheikh Rashid is the second son of Sheikh Khalifa bin Hamad al-Khalifa, sometime President of Majlis al-Tijara, and the eight son of Hamad bin Isa Al Khalifa, ruler of Bahrain from 1932 until his death in 1942. Traditionally, families such as his have demonstrated their appreciation of art through patronage and little in creativity. Exposed to literature, philosophy and music in high school, Rashid's interest in painting was encouraged by the late Amir, Sheikh Isa bin Salman Al Khalifa, followed and Sheikh Khalifa bin Salman Al Khalifa, the Prime Minister of Bahrain, when both showed genuine interest in Rashid's works at a local art exhibition at his high school.


As a young student, he actively participated in interscholastic painting activities and attended exhibitions of visiting artists. His first painting recorded was in 1966 when he was 14 years old when he had painted an oil painting of the Khamis mosque. His favourite artworks were landscapes.


When he came of age, he traveled to the United Kingdom where he studied extensively and gained a thorough knowledge of European masters. There, he was educated at the Hasting College. Realism, impressionism and abstract all have a hand in Sheikh Rashid's early works. But, it is also certain that he took liberties when producing such paintings. Upon his return in 1970, he had his first art exhibition at the Dilmun Hotel in Manama, then considered to be the prime location for Bahrain's recreational activities. From pastoral landscapes to desert scenes, once again, he has shifted his subjects and expanded the scope of his reference from the simply theoretical to the geographical as well.


He did much experimenting in the two decades between the 1970s and 1980s. His knowledge and comprehension of anatomy, perspective and composition were the foundations for his figurative and landscape paintings. His works in this period exhibits characteristics of Romanticism, Abstract Expressionism and Impressionism as well as to Realism.


In 1983, the Bahrain Arts Society was formed, and Sheikh Rashid was named its first president. The society is a non-profit organisation for Bahraini artists to gather and hold their painting exhibitions. To date the Bahrain Art Society continues its active participation in art exhibitions in Europe, the Middle East and Asia with Sheikh Rashid as the honorary president.


He also held a government post as the undersecretary for tourism and archaeology for the Ministry of Culture of Bahrain until June 2011. In the 90’s, he started to merge the two subjects and came up with his Two-dimensional paintings, his period of Individualism. After the first Gulf War, Sheikh Rashid was appointed undersecretary for immigration, passports and nationality.