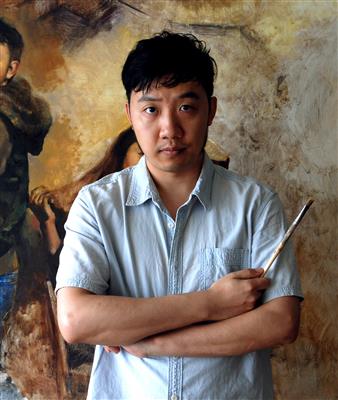 Kexin Di is a realistic oil painter, kitsch painter, painting with storytelling. His painting is with new classical context of revival the golden age of realistic large paintings like masterpieces in the 18-19 century.

He grew up in an artistic family. His parents are both oil painters at art universities. They have quite different objectives and opinions on oil painting. As a teenager, he began to ponder what kind of painting had the power to forever move people. Which was his favorite way? He admires paintings where real life is translated into paint. This is why the old masterpieces are so powerful and eternal.

Kexin Di’s art works are divided into 3 series. One series portrays realistic works where he reflects on real life scenes, such as fishermen. Because of he grew up in a fishing town, His homeland is bordered by the sea. Seafood feed the town, and the fishermen are their heroes. In his art, he presented them as lively and real. They struggle against the wind and against destiny to live their own way. Ordinary people are also the heroes in their lively life.

Another series of Kexin Di’s work, is represented by paintings from his own personal life. He painted his beautiful wife, his studio and life of his peers in the times. Life needs to be carefully seen - see what it has, appreciate its beauty and keep those special moments that he as a great artist wants to preserve.

The last series, which is also the most important series of Kexin Di’s painting, is called Politeia. In Kexin Di’s work, he painted an eternal Utopia or paradise. Here love, balance, faith, chaos, death, limbo and the void can share the same space. He described his logical world of Politeia as expressing people with cold, peaceful, solemn faces, faithful eyes and even breath, free from harm or pain…with a feeling stretching back to the ages, an immemorial moment. He is currently working on 10 or more pieces of this paradisal subject matter.

Since we have entered the era of photography, this new visual communication had become dominant in all human interactions. In this age what is the meaning of painting? Are paintings dead compared to photographs? There is confusion among painters on this point. The golden age for painting is past, so what could be next? This question is unavoidable for artists today. Fortunately, there is still a small, but special group that insist on painting, especially on figurative painting. They strive to preserve the truth of eternity, and try to break new ground while following the classical and realistic tradition. Luckily, Kexin Di is one of them, new classic &kitsch painter.

Kexin Di’s paintings come out of familiar life: a wrecked fishing boat, a garment that has long been eroded by water and sweat, even a small string of key buckles. These details are full of inspiration and are indispensable elements for his paintings.

Perhaps because Kexin DI is a Northern boy and less Southern romantic in his blood, his art is more bold and straightforward. The North cold wind makes for boundless, majestic and heavy breathing. These all influence his painting and his thoughts. That is why his works tell their story. In Di’s paintings, people are solemn, respectful, and appear like heroes.

In Kexin Di’s oil painting technique, he is inspired by Rembrandt’s works to catch the color of light. With the classical skill of cover to dye, painting can be powerful by layering oil colors decorously. Meanwhile, he often used color directly, like modern painters, combining them together. Also, he loves the Renaissance masters, such as Leonardo da Vinci and Titian. Di’s work influenced by Leonardo da Vinci, Titian and Caravaggio to some extent. They are his “soul” teachers, because, like them, Di wants to present figures’ souls and inner thoughts through their eyes to others, telling a story in the painting, presenting a world outlook at the same time as reflecting his feelings and state of mind in the painting. Painting can depict the essence of life: hope, happiness, and aspiration. It can also show cruelty, impotence, pain, hopelessness and the confusion of social life. Painting can reflect these feelings and give people love and the sense of beauty. It is his most instinctive reaction as a painter to show these feelings throughout his paintings. Kexin Di, a classical oil painter with “storytelling”, revival the golden age of realistic large painting like masterpieces in 18-19 century.


Kexin has BFA and MFA degrees in figurative painting and a robust professional artistic career which has seen his classically realist paintings exhibited and collected throughout the world.


1,Year 2008 the oil painting "Spring Tide" won the Excellence Prize of the National Exhibition of Art Works: Commemorate of the 30th Anniversary of China's Reform and Opening Up", held by China Artists Association. And it was exhibited in national art museum of China& Guangdong Museum of Art.


2,Year 2008 the oil painting "the Edge of City" and other series of graduate works won the Prize of "Luo Zhongli Fellowship", and were exhibited respectively in National Art Museum of China and Sichuan Art Museum. Meanwhile, American curator Philip Tinari published articles to comment on winner Kexin Di's works.


3,Year 2011 the oil painting "Seismoscope" was invited to exhibit to the Culture in Jiangnan "My land and My People" National Invitational Oil Painting Exhibition, held by China Artists Association, and was exhibited in Zhejiang Province Art Museum.


8,Year 2015 the oil painting "Fishing Break" won the Excellence Prize in the "Silk Road, Fantastic Gansu": 9th Western China Nationwide Art Exhibition on the Love of Earth held by China Artists Association, and was exhibited in Gansu Museum of Arts. Work was collected by Gansu Museum of Arts.


9,Year 2017 the oil painting "Under the Sun" won the selected award of China National Art Exhibition of the 10th west side art on the love of earth “Magnificent Inner Mongolia Scenery Line” held by China Artists Association, and was exhibited in Inner Mongolia Museum of Arts.