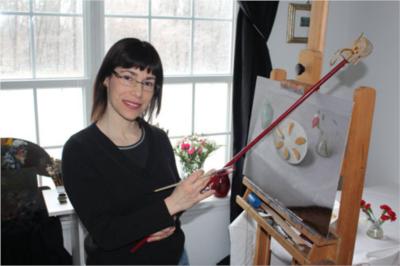 Levin was born in Alexandria, Virginia, in 1969, and soon moved with her family to Miami, Florida. Since she was young, Levin enjoyed painting and drawing, and she attended the Belvoir Terrace's summer fine arts program in Lenox, Massachusetts at the age of 14.

She moved to Italy to train at the Florence Academy of Art under Classical Realism maestro Daniel Graves. For three years she learned the techniques of European masters, and upon graduating joined the faculty to teach drawing and oil painting. She stayed at the academy for a total of eight years, as student and then educator.

She has been influenced by her mentor, Daniel Graves, Jean-Léon Gérôme, R. H. Ives Gammell, and artists from The Boston School Painters, like Edmund Tarbell, Frank Weston Benson and William McGregor Paxton.

In 2005 she founded The New School of Classical Art (NSCA) in Pawtucket, Rhode Island, with the intention of making contemporary works of the Realism movement more accessible and ongoing.

In search of subjects for her paintings, Levin's travels have taken her throughout the United States, Europe, the Middle East and South America. Her work is in the permanent collection of the Everson Museum of Art in Syracuse, New York and The New Britain Museum of American Art, New Britain, Connecticut. She's been featured in Who's Who in American Art. She is represented by Eleanor Ettinger Gallery in New York City, the Bert Gallery in Providence, Rhode Island, and Principle Gallery in Alexandria, Virginia. She has professional relationships with John Pence Gallery in San Francisco and Saks Galleries in Colorado.

By 2010 she taught the Realism movement in her studio, combining of classical two-dimensional techniques for drawing and painting with observation of how she paints.

Levin's works are mainly in the revival of the Classical Realism and representational painting tradition. However, she works in a range of genres and takes commissions for portraits and still life paintings. She works in still life, portrait painting, interiors, florals, and figure painting utilizing oil paint, charcoals, and graphite pencils.

For inspiration, Levin has cited Rembrandt, Jean-François Millet, Jean-Jacques Henner, Pieter Bruegel, Ilya Yefimovich Repin, Valentin Serov, Henri Fantin-Latour, and Johannes Vermeer. She has stated that the symbolism she uses and the emotional impact she strives for is in part inspired by the writings of Carl Jung, the story the Epic of Gilgamesh, and especially the poetry of thirteenth century Jelaluddin Rumi.