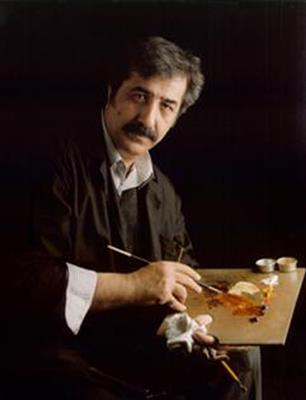 Morteza Katouzian was born on July 3, 1943 in a middle-class, art-loving family. He loved painting since childhood and he spent all his time on learning this art without any teacher.In 1960 he started graphics and painting work professionally. In graphics, he had created several posters, logos, book covers and brochures. In 1974, he accepted the responsibility of holding Tehran International Graphics Exhibition named “African Starvelings” sponsored by I.A.A. international organization, and he performed the task in a reputable way and Swon the prize of “Poster of Integration”. He was one of the founders of Graphic Artists’ syndicate in the years before the revolution and he was its head of the board for 2 years. During the past years, he has attended several collective exhibitions and held 4 solo exhibitions. All of them were “The Most Visited” exhibitions in the history of art in Iran due to the high quality of exhibited works and the affectionate look at humans and issues related to their lives which were presented in these paintings. As an example, according to the official statistics the exhibition of his works at Museum of Contemporary Arts in 1979 had 20,000 visitors. In his last exhibition in June 2008 which was held by 94 works at Saad-Abad Cultural-Historical Complex, on Wednesday June 18, 2008 in a magnificent ceremony, he was awarded UNESCO’s citation in respect of his 50 years of activities in the field of painting and his 30 years of unfeigned teaching to Iranian youth. In these 30 years of teaching painting, dozens of painters have been presented to the society of art from his small studio. I To introduce and encourage his students, he held 3 collective exhibitions for them andattended one exhibition along with them at Museum of Contemporary Arts. Through his endeavor, a book of the paintings of his students was published in 2005 which was welcomed by public.
At the time, some of these students are well-known Iranian painters and artists and they are also training students in their own studios.
Four books of Morteza Katouzian’s paintings have already been published and a lot of his works have been presented as posters. Five of his paintings are in Tehran Museum of Contemporary Arts and a big number of them are in the collections of Iranian and foreign collectors in different countries.
In his youth, he spent his free time on sports. In 1970, he was the first person who could get Karate black belt in Iran. During the following years he trained competent trainees in this field. Now holding Black Belt Dan 7 from Karate federation of Islamic Republic of Iran, he is one of the pioneers of this martial art.