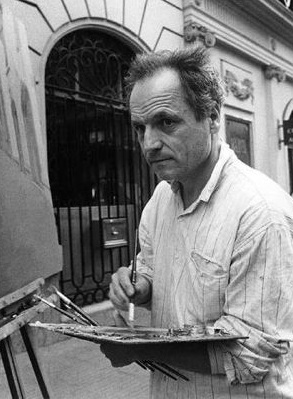 Antonio López García is the eldest son of a married couple of well-to-do farmers in the Castilian town of Tomelloso, La Mancha, and his house was located on Domecq Street. His early vocation for drawing, as well as the influence of his uncle, the painter Antonio López Torres, made up his decision to devote himself to painting.

In 1949 he moved to Madrid to prepare for admission to the Academy of Fine Arts in San Fernando, where he coincided with various artists such as Enrique Gran, Amalia Avia, and Lucio Muñoz, with whom he formed what has come to be called the Madrid School. He remained in the academy between 1950 and 1955. In 1955, thanks to a scholarship, he traveled to Italy, where he first encountered Italian Renaissance painting. He thus suffered a small disappointment in contemplating live the masterpieces that he only knew by reproductions, and that until that moment he venerated. He began to revalue classical Spanish painting, which he knew so well, thanks to frequent visits to the Prado Museum, especially Diego Velázquez.

After completing his studies, he made his first individual exhibitions in 1957 and 1961 in Madrid, while working in this city as well as in the town where he was born. In 1961 he married the painter María Moreno, a union from which two daughters were born: María in 1962 and Carmen in 1965. From this last year and until 1969 he was professor in charge of the Chair of color preparatory in the School of Fine Arts of San Fernando.

In 1990 the film director Victor Erice filmed El sol del membrillo, a film in which the artist's creative process is collected while painting a quince-keeper from the patio of his house. In January 1993 he was appointed member of the Madrid Royal Academy of San Fernando and in that same year, the Reina Sofía Museum dedicated an anthological exhibition.

In 2008, the Boston Museum of Fine Arts dedicated a monographic exhibition.1 In addition, his work Madrid from Torres Blancas reached at an auction of Christie's of London the 1,918,000 £, the largest amount paid so far for a work Of a living Spanish artist.2

In 2011 the Thyssen-Bornemisza Museum and the Museum of Fine Arts in Bilbao dedicated temporary exhibitions with works of all stages, but mostly of their latest production.

Antonio López García (born 6 January 1936) is a Spanish painter and sculptor, known for his realistic style. He is criticized by some art critics for what they consider neo-academism, but praised by others, such as Robert Hughes, who consider him a master realist. His style sometimes is deemed hyperrealistic. His painting was the subject of the film El Sol del Membrillo, by Victor Erice, in 1992.

López García was born on 6 January 1936 in Tomelloso, Ciudad Real, a few months before the beginning of the Spanish Civil War. It first appeared that Antonio would continue in the family tradition as a farmer, but an early facility for drawing caught the attention of his uncle Antonio Lopez Torres, a local painter of landscapes, who gave him his first lessons. In 1949 he moved to Madrid in order to study for entrance to the competitive Real Academia de Bellas Artes de San Fernando.

Between 1950 and 1955 he studied art at the Real Academia de Bellas Artes de San Fernando, winning a number of prizes. While at the school he developed a friendship with Maria Moreno—also a painter—whom he would marry in 1961. He also formed friendships with Francisco Lopez Hernandez, Amalia Avia, and Isabel Quintanilla. Out of this nucleus a realist group, the New Spanish Realists, was formed in Madrid. López Garcia became friends with Jack Chambers, a Canadian studying in Madrid. Although Chambers did not belong to the New Spanish Realists, parallels to their style can be found in his work created in Canada in the late 1960s.

Madrid of the postwar period was isolated from the international panorama of art and culture. All the information that López García accessed on contemporary art was derived from library books at the school; he gradually became aware of Picasso and other great artists of the period.

In 1955, a scholarship allowed him to travel to Italy with Francisco Lopez and study Italian painting from the Renaissance. During this period he began to reevaluate Spanish painting in the Prado, especially Velázquez, a constant reference.

By 1957 his work had registered a certain surreal quality. Figures and objects appear to float in space and his pictures are populated by images removed from their contexts. The fantastic vein remains at least until 1964.

During this period Antonio López shows an increasing interest in the representation of objects, independent of their contained narrative load. Magic Realism continued to inform his work through the mid-1960s, but gradually, as he said, "the physical world gained more prestige in my eyes." In fact he had never abandoned it. The 1959 oil Francisco Carretero and A. López García Talking, like many portraits and townscapes of this period, is devoid of surrealistic devices. So are Autumn (1961) and The Sea (1961–70). Some of his relief sculptures conjure fantastic episodes, such as The Apparition (1963), in which a child hovers mid-air against a wall, gliding toward an open door. There are many affinities with the Tuscan Renaissance in his work in three dimensions. The ethereal Head of Carmencita (1965–68), for example, might at first glance be taken for a quattrocento Florentine bronze by Desiderio da Settignano. García's painting also reverberates with the art of the past. The Grapevine (1960) evokes Tiepolo's sunlight, The Quince Tree (1962) Chardin's dusky murk, and other paintings echo Old Masters from Dürer to Degas.