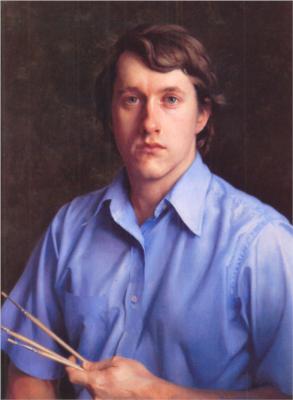 Richard Whitney, PhD.H (born 1946 in Vermont), is an American painter, author and educator. Town & Country magazine has named him one of the top dozen portrait painters in America. Fine Art Connoisseur has called him one of "the giants of the field" of figurative painting. Whitney's portraits and landscapes hang in over 750 public and private fine art collections worldwide. They include the Anchorage Museum of Art and History; the Anderson House Museum; the Newark Museum; the Pentagon; Harvard, Yale, and Stanford universities; and the Catholic University of Portugal. He has won over 40 regional and national awards as well as three grants from the Greenshields' Foundation of Montreal. Whitney was awarded an Honorary Doctor of Fine Arts from the University of New Hampshire in 2015.

Whitney is the author of the book Painting the Visual Impression which summarizes the basic principles of representational painting. First published in 1972, it has been read by thousands of artists world-wide. He is also a co-author of the book Realism in Revolution: The Art of the Boston School. His paintings have also been reproduced in the book Edmund C. Tarbell and the Boston School of Painting.

Whitney graduated Phi Beta Kappa from the University of New Hampshire in 1968. He studied with Sidney F. Willis and with the eminent Boston painter R. H. Ives Gammell for five years. Whitney's paintings have been seen on national cable television and have been the subject of numerous newspaper and magazine articles. He has traveled and painted in Europe, Japan, Alaska and the Caribbean and has lectured and conducted workshops throughout the United States. He is listed in a dozen reference books, including Who's Who in American Art, Who's Who in America, and Who's Who in the 21st Century. Whitney and his artist wife Sandy Sherman live on Crescent Pond in Stoddard, New Hampshire.

(From a list of over 750 public and private collections)