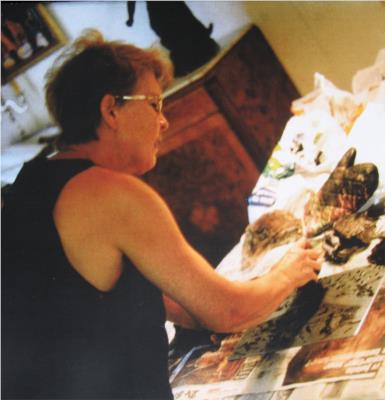 Hubertine Heijermans was born in Amsterdam on the 8th of January in 1936. She was 15 when she took her first painting lessons with Jos Rovers from 1951- 1954. In 1955 Heijermans won a scholarship for the Rijksakademie in Amsterdam; there she worked with professor Gé Röling (1904-1981) and Jan Wiegers. In 1956 she met Nils Tellander, born in Holland, but a volunteer in the British Army during the second world war. They got married in September 1958 and settled in Switzerland in Chailly-Lausanne, where in 1960 their son Anian was born.

In 1968 Heijermans entered the American high school Villa Schifanoia in Florence, Italy, the European section of Arts and Sciences in River Forest, illinois USA. Villa Schifanoia stood on the heights of San Domenico di Fiesole. Her etching teacher Swietlan Kraczyna found a studio for her in a Florentine palazzo near Ponte Carraia at the river Arno. In 1972 Heijermans won the Premio Brunellesco (a Florentine prize for painters, sculptors and other artists) with a series of seven oil paintings, honored by Piero Bargellini, the Mayor of Florence.

In 1972 Heijermans returned to Villars in Switzerland, taking with her the 200 kilogram etching press from Bendini-Bologna. The couple Tellander divorced in 1973; her husband Nils Tellander remained in Lausanne. He died in 2001 in the South of France. Hubertine Heijermans continued to live and work in the canton Vaud in Switzerland, a Pre-Alp region. There she made many etchings and photo-etchings of the Swiss landscape, Swiss villages, farm-houses, barns and the rural architecture in a rather detailed and recognizable manner, until 1988. Moreover she made many colorful watercolor paintings on paper of the same subject. Hubertine Heijermans never stopped painting with oils, in particular during the winter months spent in Spain from 1996- 2006 and in Bages in the South of France during the year 2006. In Holland she always worked with watercolor or oil paint during the summer, from 1983 until 1999. Her teacher in photo-etching and heliography was the wellknown printmaker Luis Camnitzer from Pratt's Institute, New-York. In Spain she received valuable instruction for watercolor from Jesus Peñarreal.

The Museum Jenisch in Vevey, Switzerland keeps over 80 of her etchings and aquatint prints in the 'Cabinet d'Estampes'. The Museum Elysée in Lausanne has 45 of her 'héliogravures à grain'. In Venlo, The Netherlands the museum Bommel-van Dam keeps 23 of her etchings. Hubertine Heijermans exhibited in Swiss Vouvry at a historical occasion of the 'Château de la Porte du Scex'. The original copperplate of her etching of the castle of Aigle and other of her art-works are kept in the castle.

Hubertine Heijermans was born in Amsterdam. on 8 January 1936. She was educated at the Barlaeus Gymnasium, took painting lessons from 1954-1957 with Jos Rovers, and then studied for 2 years at the Rijksakademie in Amsterdam with professor Gé Röling (1904–1981). In 1958 she met Nils, born in the Netherlands, but a volunteer and an officer in the British Army during the second world war. They got married and settled in Lausanne, where in 1960 their son Anian was born. From 1968 until 1972 Heijermans studied etching technics at the American highschool Villa Schifanoia, of the European Section of Rosary College of Arts and Sciences, Illinois USA, now Dominican University, and in Fiesole, Italy. The school was run by Dominican Sisters. In order for her to not remain all day in the convent, her etching teacher Swietlan Kraczyna found a studio in a palazzo overlooking Florence and the river Arno. In 1972 Heijermans won the Premio Brunelleschi (a Florentine prize for painters and sculptors) with a series of seven oilpaintings of a young Haitian woman, honored by Piero Bargellini the Mayor of Florence. Then she returned to Villars in Switzerland with her heavy etching press Bendini-Bologna, who is not electrically driven, but has to be turned by hand. The couple divorced in 1973. Nils died in 2001 in the South of France. Hubertine Heijermans still lives and works in Switzerland as an artist-painter and graveur Suisse since 1958. She now, in 2015 has her own artist Studio, Atelier 'Hubertine', situated in Canton de Vaud since 1981. She has been painting in Spain at the Costa Blanca since 1996 until 2006, because she would drive her car from Switzerland through France and Spain during 2 days, as hibernating in the Province of Alicante had become possible financially and she had the freedom to leave for 3 months in the winter. She still paints at home, but graphic artwork like etching has become too heavy. Yet, paint and a canvas are never far away, as painting is possible up to an advanced age. And as long as one is healthy a painter also collects a lot of experience and uses his capabilities to the maximum. Her paint got more substantial depth and she is obviously now mentioned more frequently, therefore people can find more about her work and person, since she also published a book about her life and art work, which one can read in the BCUL in Lausanne, the Bibiliothèque Cantonale Universitaire de Lausanne, since 2009. Her painting technics are definitely impressionistic, but her material is perfected with underlying coats of mixed white and lead white, which adds and enriches the oil paint and allows the material to become more alive and expressive. She remembers also the valuable but rare lessons of the famous Florentine painter, Pietro Annigoni who showed her to make paint herself with tempera technics. At the age of 80 she now prepares oil paintings about musicians playing the flute or she paints a series of nudes - models one can today find even on TV or Youtube. This artist-painter indeed lives with her time. She is also present on Flickr since April 2016.