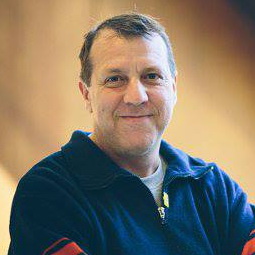 Craig Mullins (born 1964) is an American digital painter, and leading international concept artist. He has created art for books, video games and films. He is often considered to be one of the first to pioneer in the field of digital painting.

Craig Mullins was born in 1964 in California and moved at the age of three to Ohio. When he was 18, he went back to California, where for several years he lived in the proximity of Los Angeles. He went to Pitzer College in Claremont, California, for two years, and then studied at Art Center College of Design to study product design and illustration. He started out as a transportation designer and got a job at Ford in Detroit. There, he discovered that his design sense was a little bit too extreme for the car industry, so he returned to Art Center to study Illustration, where he got his BFA in 1990. Since then, he has worked on many projects as concept artist, illustrator and matte painter. Mullins realized that the digital era freed him from all geographical constraints, so he moved to Hawaii, where he still lives today. He stated that he is trying to stay in as many areas of illustration as possible. His works are inspired by John Singer Sargent and Frank Frazetta.

Mullins has illustrated cards for the Magic: The Gathering collectible card game.

He did book covers for the following books:

He did matte paintings and concept art for these pictures:

He did illustrations for the following videogames: