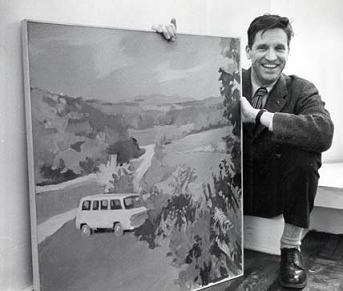 Fairfield Porter (June 10, 1907 – September 18, 1975) was an American painter and art critic. He was the fourth of five children of James Porter, an architect, and Ruth Furness Porter, a poet from a literary family. He was the brother of photographer Eliot Porter and the brother-in-law of federal Reclamation Commissioner Michael W. Straus.

While a student at Harvard, Porter majored in fine arts; he continued his studies at the Art Students' League when he moved to New York City in 1928. His studies at the Art Students' League predisposed him to produce socially relevant art and, although the subjects would change, he continued to produce realist work for the rest of his career. He would be criticized and revered for continuing his representational style in the midst of the Abstract Expressionist movement.

His subjects were primarily landscapes, domestic interiors and portraits of family, friends and fellow artists, many of them affiliated with the New York School of writers, including John Ashbery, Frank O'Hara, and James Schuyler. Many of his paintings were set in or around the family summer house on Great Spruce Head Island, Maine and the family home at 49 South Main Street, Southampton, New York.

His painterly vision, which encompassed a fascination with nature and the ability to reveal extraordinariness in ordinary life, was heavily indebted to the French painters Pierre Bonnard and Édouard Vuillard. John Ashbery wrote of him: "Characteristically, [Porter] tended to prefer the late woolly Vuillards to the early ones everyone likes".

Porter said once, "When I paint, I think that what would satisfy me is to express what Bonnard said Renoir told him: 'make everything more beautiful.'"

Porter bequeathed about 250 of his works to the Parrish Art Museum.