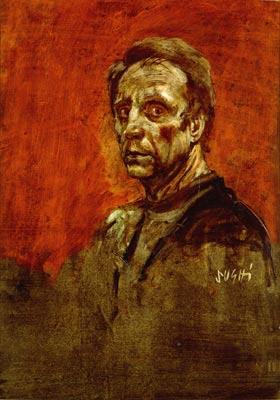 Alberto Sughi was born in Cesena on 5 October, 1928. His artistic development is almost always expressed in thematic cycles, resembling cinematographic sequences. Firstly, the so-called green paintings, dedicated to the relationship between man and nature (1971-1973). Then La cena (1975-1976) and, at the beginning of the 1980s, the twenty paintings and fifteen studies of the Immaginazione e memoria della famiglia. From 1985 he produced the series La sera o della riflessione. From the year 2000 he created the Notturno cycle.
After classical studies, and artistically self-taught, he learnt the rudiments of his art from his uncle. Sughi first exhibited in a collective exhibition in Cesena in 1946 and, in the same year, he spent a period of time in Turin, where he worked as an illustrator for the newspaper Gazzetta del Popolo. Between 1948 and 1951 he worked in Rome, where he met various artists, among whom Marcello Muccini and Renzo Vespignani from the Gruppo di Portonaccio, a fundamental meeting for Sughi, both from the personal and the artistic point of view.
He returned to Cesena in 1951. These were the years when the “existential realism” movement was formed. Renato Guttuso supported it and Antonello Trombadori compared it to the style of Edward Hopper. At the beginning of the ‘70s Sughi moved from the city of Cesena to the nearby hills of Carpineta and started work on the cycle La cena , a clear metaphor for middle class society, containing a certain Germanic realism, resembling the works of George Grosz and Otto Dix, enveloped in almost metaphysical atmospheres, isolating every character and freezing them within the scene.
Ettore Scola chose one of the paintings from the Cena cycle as a poster for his film La Terrazza, and Mario Monicelli was inspired by Sughi’s atmospheres and colours in his Un borghese piccolo piccolo. In 1978, La cena was exhibited in Moscow at the Manezh Gallery. In 1980 Sughi started work on a new narrative cycle entitledImmaginazione e memoria della famiglia. Together with his large triptych, Teatro d’Italia, painted between 1983 and 1984, it showed that the artist had returned to the theme of modern society. Teatro d’Italia is, in fact, a great social allegory.
Sughi has taken part in all the most important contemporary art events, from the Biennale Internazionale d’Arte in Venice to the Quadriennale in Rome – of which he has also been Director – and to numerous exhibitions. Both Italian and foreign museums have shown many retrospective exhibitions of his work.
On 28 November 2005, Carlo Azeglio Ciampi presented him with the prestigious Vittorio De Sica Prize, as homage to an artist who, ever since his early works, has shown a particular feeling for the cinema, even going as far as to state that “the cinema taught me how to paint”.


Sughi was born in Cesena, Emilia-Romagna.


A self-taught painter, by the end of his formative years he had become one of the greatest Italian artists of his generation. He started painting in the early 1950s, choosing realism in the debate between abstract and figurative art in the immediate post-war period. Even from his early works, however, Sughi’s paintings have avoided any attempt at social moralising. They depict moments from daily life with no heroes, allowing Enrico Crispolti, in 1956, to define his work as "existential realism". His artistic expression proceeds, almost always, in thematic cycles, in the manner of film sequences. First of all, there were his so-called "green paintings", devoted to the relationship between man and nature (1971–1973), then the Supper cycle (1975–1976), after that the 20 paintings and fifteen studies of Imagination and Memory of the Family, dating from the early 1980s; the series Evening or reflection started from 1985. His most recent series of large canvases, exhibited in 2000, is entitled Nocturnal.


Sughi has taken part in all the most important collective exhibitions of contemporary art, from the International Biennale art exhibition in Venice to the Quadriennale in Rome, as well as various exhibitions that have been held abroad, charting the history of Italian art from the 1970s until today. Italian and foreign museums have held large retrospective exhibitions; among the most significant are the Gallery of Modern Art in Bologna (1977), the Manezh Gallery in Moscow (1978), the Museum of Castel Sant'Angelo in Rome, the Fine Arts Museum in Budapest and the National Gallery in Prague (1986), the Civic Modern Art Gallery in Ferrara (1988), the Casa Masaccio in San Giovanni Valdarno (1990), the Assis Chateaubriand Art Gallery in São Paulo in Brazil (1994) and the Civic Museum of San Sepolcro (2003). The artist has taken part in the cycle of exhibitions entitled The search for identity in Cagliari, Palermo and Ascoli Piceno (2003–2004), the exhibition Evil. Exercises in cruel painting at the Hunting Lodge of Stupinigi, in Turin (2005), and the exhibition "Intimate Portraits from Lotto to Pirandello", at the Regional Archaeological Museum in Aosta (2005) .


In 1994, Alberto Sughi was appointed director of the Ente Quadriennale Nazionale d' Arte in Rome.


At the end of 2005 and until 21 January 2006, a large retrospective exhibition of Sughi’s work was held at the Palazzo della Pilotta in Parma. The exhibition contained 642 works, including paintings, tempera, drawings, and lithographs, made between 1959 and 2004, and owned by the collections of the Centro Studi ed Archivio della Comunicazione (CSAC) at the University of Parma, including the painting Rimmel, made in 2004.
In April and May 2006, the modern art gallery in Arezzo held the exhibition il Segno e l'Immagine, consisting of 50 works (all made on paper and then applied to canvas) painted in 2005 and 2006.
2007 has seen two new major Alberto Sughi's solo exhibitions, the first hold in the new rooms of the Biblioteca Malatestiana di Cesena, the second in the Complesso Vittoriano, Rome.
In May 2009 Alberto Sughi had a new large retrospective this time in Palazzo Sant'Elia, Palermo, Sicily. The exhibition presented a group of ninety paintings, both from public and private collections. The exhibition catalogue featured a long essay "Dove va l'uomo" ("Where man goes") by the exhibition curator Professor Maurizio Calvesi. In September 2009 the same exhibition was shown at the Italian Institute of Culture in London.