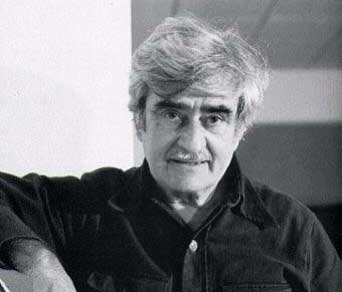 Alberto Burri (12 March 1915 – 13 February 1995) was an Italian painter and sculptor considered a key figure in Post-War art and such artistic movements as Neo-Dada, Nouveau réalisme, postminimalism and Arte Povera.

In one of his very rare statements, Burri claimed that the critics’ words, as well as his own, were of no use in offering a description of his artworks, affirming that its only real key strength was the formal balance that poor and industrial materials were surprisingly able to give.

During his adolescence he preferred soccer to school, even though he soon felt an inclination towards Ancient Greek (anticipatory of his future readings) and Drawing, although not included in his school subjects.

Having been born in a region rich in art, he shared great bike rides and the contemplation of Renaissance art with the brothers Alvaro and Nemo Sarteanesi, both art students at that time and later on important figures in the artistic tutelage of Città di Castello.

After a Medical Degree at the University of Perugia and a precocious voluntary experience in the Italo-Ethiopian War, Burri was then recalled to military service on 12 October 1940, two days after Italy’s entrance into World War II, and sent to Libya as a combat medic.

On 8 May 1943 the unit he was part of was captured by the British in Tunisia and was later turned over to the Americans and transferred to Hereford, Texas in a prisoner-of-war camp housing around 3000 Italian officers.

Prevented from practicing his medical profession, Burri had the opportunity of choosing a leisure activity thanks to the YMCA Association. Using the limited amount of materials available in the camp he took on the activity of painting, at the age of almost 30 and without any kind of academic reference.

Meanwhile, the tragic death of his younger brother Vittorio on the Russian front in 1943 had a strong impact on him.

Shutting himself off from the rest of the world, and depicting figurative subjects on thick chromatic marks, he progressively realized the desire of abandoning the medical profession, in favor of painting.

Once Burri returned to Italy on 27 February 1946, his decision collided with the severe post–World War II recession and his parents’ dissatisfaction. He moved to Rome as a guest of the violinist and composer Annibale Bucchi, his mother’s cousin, who encouraged his activity as a painter.

While in Rome, he had the chance of establishing a contact with the few but very active institutions dedicated to painting, which were creating a new platform for visual arts after the war.

He remained a reserved artist, ceaselessly working and creating, initially in a small studio in Via Margutta but frequently moving out. As a matter of fact, Milton Gendel – an American journalist who visited Burri’s studio in 1954 –, later reported: "The studio is thick-walled, whitewashed, neat and ascetic; his work is ‘blood and flesh,’ reddened torn fabric that seems to parallel the staunching of wounds that Burri experienced in wartime.”