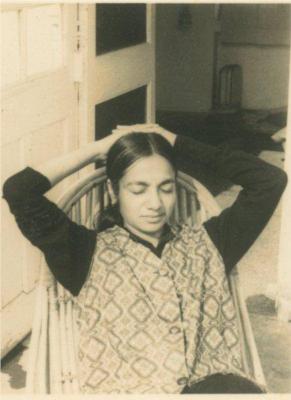 Nasreen Mohamedi (1937—1990) was an Indian artist best known for her line-based drawings, and is today considered one of the most essential modern artists from India. Despite being relatively unknown outside of her native India during her lifetime, Mohamedi's work has been the subject of remarkable revitalisation in international critical circles and has received popular acclaim over the last decade. Her work has been exhibited at the Museum of Modern Art (MoMA) in New York, the Kiran Nadar Museum of Art in New Delhi, documenta in Kassel, Germany, and at Talwar Gallery, which organised the first solo exhibition of her work outside of India in 2003, and which has represented her estate for over a decade, in New York and in New Delhi. Today, Mohamedi is considered one of the major figures of the art of the twentieth century.

Born in 1937 in Karachi, India, in what became western Pakistan some ten years after her birth, Mohamedi lived, even from her early years, a cosmopolitan life. She was one of eight children. Her mother passed away when she was very young. Her father owned a photographic equipment shop in Bahrain, among other business ventures. Her family moved to Mumbai in 1944, and later Mohamedi attended St. Martin's School of the Arts, in London, from 1954 to 1957. After living briefly with her family in Bahrain, Mohamedi studied on a scholarship in Paris from 1961 to 1963, and when she returned to India, she joined the Bhulabhai Institute for the Arts in Mumbai, where she met other artists working at the time, including V.S. Gaitonde, M.F. Husain and Tyeb Mehta. Sometime after she joined the Bhulabhai Institute, her first solo exhibition was hosted in Gallery 59. it was in Bombay where she met abstractionist Jeram Patel, who went on to become her friend and colleague, while Gaitonde served as her mentor.

She settled in Baroda in 1972, where she taught Fine Art at Majaraja Sayajirao University, and would continue teaching until her death in 1990. She also travelled abroad extensively, spending time in Kuwait, Bahrain, Japan, United States, Turkey, and Iran over the course of her life. Travel provided an essential source of inspiration for Mohamedi, who photographed and kept diaries throughout her life; not only was she influenced by the deserts, Islamic architecture, and Zen aesthetics that she was exposed to during her travels, but, as Susette Min notes, “Mohamedi was deeply and intensely aware, as indicated in her photographs and journal entries, of herself and her body moving in time.” During the last decade of her life, Mohamedi’s motor functions gradually deteriorated as she was challenged with a rare neurological disorder similar to Parkinson's disease called Huntington's Chorea; she was able, however, to retain control of her drawing hand, and to continue to create the precise, meticulous work she became known for, until her death at age 53.

Mohamedi is most often associated with Agnes Martin, with whom she was paired at the 2007 documenta in Kassel, Germany. Although Mohamedi's disciplined mark-making and frequent use of grids and lines does recall Martin's work, however, Mohamedi herself was not aware of the American artist and her paintings until late in her life.