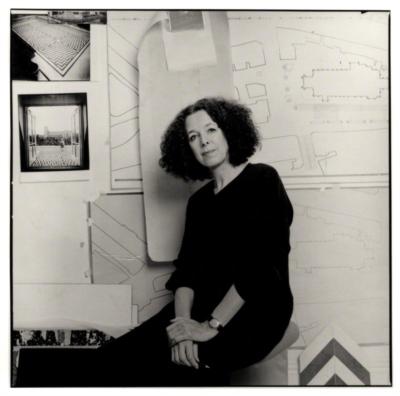 Tess Jaray RA (born 31 December 1937) is a British painter and printmaker. She taught at The Slade School of Fine Art, UCL from 1968 until 1999. Over the last twenty years Jaray has completed a succession of major public art projects. She was made an Honorary Fellow of RIBA (Royal Institute for British Architects) in 1995 and a Royal Academician in 2010.

Born in Vienna in 1937, Jaray grew up in rural Worcestershire, England, where her parents emigrated in 1938. Jaray's father Franz Ferdinand Jaray was a chemical engineer and industrial inventor. Her mother, Pauline Arndt, attended Art School in Vienna. Jaray's great aunt was the gallerist Lea Bondi Jaray who was responsible for bringing many of the German Expressionists to London. Noting the influence of Gustav Klimt, leader of the Vienna Secessionists, Jaray has written that ‘He was one of the very first artists I learned about as a teenager.’

At the age of sixteen Jaray left home to study painting at Saint Martins School of Art in London. After completing her general education in fine art in 1957 Jaray was accepted to study at the Slade School of Fine Art. With a guaranteed place at the Slade she took time out to travel to Paris where she stayed at no.16 Rue des Cannettes in the hotel run by Marcel Proust's housekeeper, Celeste Albaret. In Paris Jaray made several formative relationships including with fellow hotel guest Valli Myers and the Slovenian painter Zoran Mušič.

After five months Jaray returned to London to attend the Slade. At that time William Coldstream was Professor of Painting and the art historian E.H. Gombrich was in his last year as Professor of Art History. Both messianic figures influenced the young artist's thinking.

In the few years following art school Jaray was awarded two traveling scholarships. In 1960 she received the Abbey Minor Traveling Scholarship to Italy. Here Jaray experienced for the first time the impact of Italian Architecture, as well as the art she had gone there to see. The following year in 1961 she received the French Government Scholarship, which allowed her to return to France to live and work for some months. While in Paris she worked in the etching studio of Stanley William Hayter at Atelier 17.

The impact of Renaissance architectural spaces Jaray encountered on her travels in Italy were formative for the development of her distinctive technique. In these ceilings she saw how simple lines interacted to transform space, powerfully inducing emotional responses. Writing on Jaray's paintings of the 60s Jasia Reichardt said they could be called '"ceiling geography" because they suggest views of an interior seen from below... Her paintings suggest some underlying mystery through the suggestion of architectural perspective.' Much of her career as a painter has been spent investigating the quality of effects geometry, pattern, repetition and colour have on space. The patterns she creates evoke spatial ambiguities and shifting structures which work on the viewer's perceptions in subtle ways. According to the critic Terry Pitts, her work ‘sense(s) the way in which history of decoration and patterning is embedded with elemental human experiences and impulses’. At this time of significant development, in 1964 Jaray began teaching. For four years she taught at Hornsey College of Art, before becoming the first female teacher at the Slade in 1968. In 1999 Jaray became Reader Emeritus in Fine Art at the Slade.