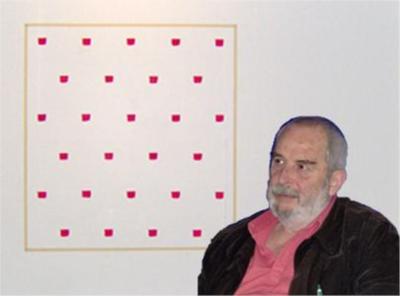 Niele Toroni (born March 15, 1937 in Muralto) is a Swiss painter. He lives and works in Paris.

In 1966 Toroni started a practice he calls "Travail-Peinture". Toroni's method, brushstrokes made with imprints of a no. 50 paintbrush repeated at perpendicular 30 centimeter intervals, was first shown at a debut in 1967 in Paris at an exhibition-performance at the Salon de la Jeune Peinture in the Musèe d'Art Moderne de la Ville de Paris. That same year, Toroni founded the BMPT (art group) together with Daniel Buren, Olivier Mosset, and Michel Parmentier. In works like Miroir d’Eau (1973) and Vert Wagon (1977), the imprints made with a n°50 paintbrush are repeated at regular intervals of 30 cm.

Toroni received the Wolfgang Hahn Prize, Cologne, Germany in 2003 and the French Vermeil Medal, awarded by the City of Paris in 2001.