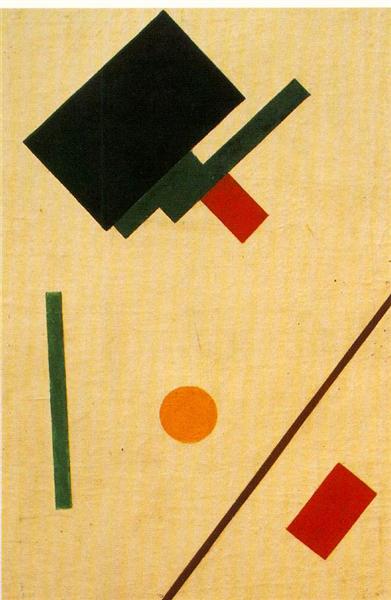 Suprematism (Russian: Супремати́зм) is an art movement, focused on basic geometric forms, such as circles, squares, lines, and rectangles, painted in a limited range of colors. It was founded by Kazimir Malevich in Russia, around 1913, and announced in Malevich's 1915 exhibition, The Last Futurist Exhibition of Paintings 0.10, in St. Petersburg, where he, alongside 13 other artists, exhibited 36 works in a similar style. The term suprematism refers to an abstract art based upon "the supremacy of pure artistic feeling" rather than on visual depiction of objects.

Kazimir Malevich developed the concept of Suprematism when he was already an established painter, having exhibited in the Donkey's Tail and the Der Blaue Reiter (The Blue Rider) exhibitions of 1912 with cubo-futurist works. The proliferation of new artistic forms in painting, poetry and theatre as well as a revival of interest in the traditional folk art of Russia provided a rich environment in which a Modernist culture was born.

In "Suprematism" (Part II of his book The Non-Objective World, which was published 1927 in Munich as Bauhaus Book No. 11), Malevich clearly stated the core concept of Suprematism:

He created a suprematist "grammar" based on fundamental geometric forms; in particular, the square and the circle. In the 0.10 Exhibition in 1915, Malevich exhibited his early experiments in suprematist painting. The centerpiece of his show was the Black Square, placed in what is called the red/beautiful corner in Russian Orthodox tradition; the place of the main icon in a house. "Black Square" was painted in 1915 and was presented as a breakthrough in his career and in art in general. Malevich also painted White on White which was also heralded as a milestone. "White on White" marked a shift from polychrome to monochrome Suprematism.

Malevich's Suprematism is fundamentally opposed to the postrevolutionary positions of Constructivism and materialism. Constructivism, with its cult of the object, is concerned with utilitarian strategies of adapting art to the principles of functional organization. Under Constructivism, the traditional easel painter is transformed into the artist-as-engineer in charge of organizing life in all of its aspects.

Jean-Claude Marcadé has observed that "Despite superficial similarities between Constructivism and Suprematism, the two movements are nevertheless antagonists and it is very important to distinguish between them." According to Marcadé, confusion has arisen because several artists—either directly associated with Suprematism such as El Lissitzky or working under the suprematist influence as did Rodchenko and Lyubov Popova—later abandoned Suprematism for the culture of materials.

Suprematism does not embrace a humanist philosophy which places man at the center of the universe. Rather, Suprematism envisions man—the artist—as both originator and transmitter of what for Malevich is the world's only true reality—that of absolute non-objectivity.

...a blissful sense of liberating non-objectivity drew me forth into a "desert", where nothing is real except feeling... ("Suprematism", Part II of The Non-Objective World)

For Malevich, it is upon the foundations of absolute non-objectivity that the future of the universe will be built - a future in which appearances, objects, comfort, and convenience no longer dominate.