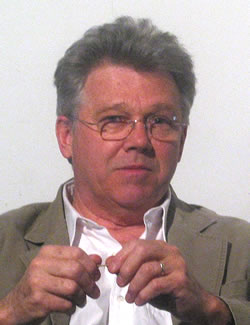 Born to a working-class family, Kuehn's experience working as a steel worker and a roofer in the 1950s and 60’s were formative in the development of his work, and shaped his relationship to the physicality of raw materials. He received his MFA in 1964 from Rutgers University, where he went on to become tenured faculty and department chair in Fine Arts.

Kuehn's work was included in the groundbreaking exhibitions Eccentric Abstraction curated by Lucy Lippard in 1966 and When Attitudes Become Form curated by Harald Szeemann in 1969. His work is known for its fluid use of materials that undermined the psychology of dominant Minimal Art practices. Although his work is most often classified as Minimal, Postminimal or Process Art his work defies boundaries and can be difficult to classify. The unifying theme throughout his discursive practices is a tension between forms as evident in his Black Paintings and Melt Pieces. In 1992 when he received the Francis J. Greenburger Foundation Award, George Segal wrote about the “rule-breaking” in Kuehn’s work and said, “Artists [like Kuehn] who don’t fit comfortably into art historical categories have a terrible time.” Kuehn's refusal to produce trademarked work explains why he was "unfairly sidelined by history" according to art historians such as Thomas Crow, although his work has now become accepted in the art historical canon with artists such as Bill Bollinger and Keith Sonnier.

His first museum retrospective opened at the Kunstmuseum Liechtenstein in September 2014. He is represented by Haeusler Contemporary Gallery in Munich and Zurich.