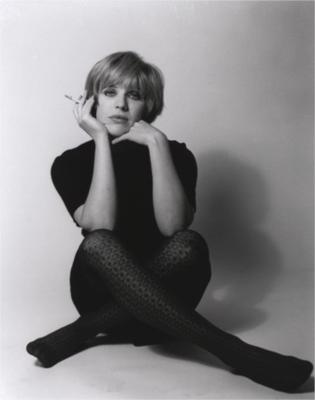 Pauline Boty (6 March 1938 – 1 July 1966) was a founder of the British Pop art movement and the only female painter in the British wing of the movement. Boty's paintings and collages often demonstrated a joy in self-assured femininity and female sexuality, and expressed overt or implicit criticism of the "man's world" in which she lived. Her rebellious art, combined with her free-spirited lifestyle, has made Boty a herald of 1970s feminism.

Boty was born in suburban south London in 1938 into a middle-class, Catholic family. The youngest of four children, she had three older brothers and a stern father who made her keenly aware of her position as a girl. In 1954 she won a scholarship to the Wimbledon School of Art, which she attended despite her father's disapproval. Boty's mother, on the other hand, was supportive, having herself been a frustrated artist and denied parental permission to attend the Slade School of Fine Art. Boty earned an Intermediate diploma in lithography (1956) and a National Diploma in Design in stained glass (1958). Her schoolmates called her "The Wimbledon Bardot" on account of her resemblance to the French film star Brigitte Bardot. Encouraged by her tutor Charles Carey to explore collage techniques, Boty's painting became more experimental. Her work showed an interest in popular culture early on. In 1957 one of her pieces was shown at the Young Contemporaries exhibition alongside work by Robyn Denny, Richard Smith and Bridget Riley.

She studied at the School of Stained Glass at the Royal College of Art (1958–61). She had wanted to attend the School of Painting, but was dissuaded from applying as admission rates for women were much lower in that department. Despite the institutionalized sexism at her college, Boty was one of the stronger students in her class, and in 1960 one of her stained glass works was included in the travelling exhibition Modern Stained Glass organized by the Arts Council. Boty continued to paint on her own in her student flat in west London and in 1959 she had three more works selected for the Young Contemporaries exhibition. During this time she also became friends with other emerging Pop artists, such as David Hockney, Derek Boshier, Peter Phillips and Peter Blake.

While at the Royal College of Art, Boty engaged in a number of extracurricular activities. She sang, danced, and acted in somewhat risqué college reviews, published her poetry in an alternative student magazine, and was a knowledgeable presence at the film society where she developed her interest especially in European new wave cinema. She was also an active participant in Anti-Ugly Action, a group of RCA students involved in the stained glass, and later architecture, courses who protested against new British architecture that they considered offensive and of poor quality.

Boty was at her most productive just two years after graduating from college . She developed a signature Pop style and iconography. Her first group show, "Blake, Boty, Porter, Reeve" was held in November 1961 at A.I.A. gallery in London and was hailed as one of the first British Pop art shows. She exhibited twenty collages, including Is it a bird, is it a plane? and a rose is a rose is a rose, which demonstrated her interest in drawing from both high and low popular culture sources in her art (the first title references the Superman comic, the second quotes the American expatriate poet Gertrude Stein).