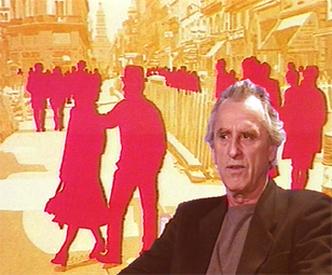 Gérard Fromanger is a French artist born on 6 September 1939 in Jouars-Pontchartrain, Yvelines. A painter who has also used collage, sculpture, photography, cinema and lithography, he is associated with the French artistic movement of the 1960s and 1970s called Figuration Narrative (new figurative representation), somewhat like pop art. Fromanger has also been associated with photorealism.

Fromanger studied at the École des Beaux-Arts in Paris, where his first solo exhibition was held in 1966. Souffles, his large translucent "half-balloon" street sculptures, attracted attention in 1968. He also collaborated with Jean-Luc Godard to make the short "Film-tract 1968". Urban life and the consumer society are themes well represented in his work.

The Nouvelle Figuration movement (sometimes called figuration narrative or représentation narrative) is considered to have been a reaction against abstract art, with a more political slant than American pop art. Fromanger has been described as a social critic who takes a political position without neglecting the poetic dimension.

Michel Foucault, a friend of Fromanger's, wrote about his work in Photogenic Painting.

In 2005 a retrospective exhibition, Gérard Fromanger: rétrospective 1962-2005, was shown at various galleries in France, Belgium, Luxembourg and Switzerland. Fromanger now lives and works in both Siena and Paris.