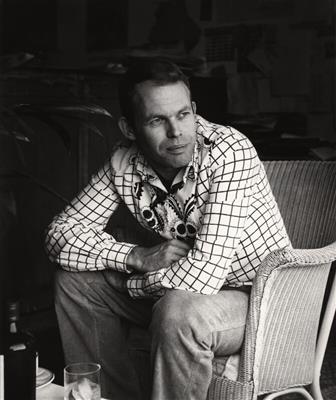 Mark Lancaster (born 14 May 1938 in Holmfirth, West Yorkshire) is an English artist and set designer.

Mark Lancaster was born Christopher Ronald Mark Lancaster, but early in life he decided that "Mark" was his favorite of the three names. Educated at Holme Valley Grammar School, 1949–52, and Bootham School, York, from 1952 to 55, after which he worked in a family textile business and studied textile technology for six years, painting in his own time, before going to King's College, Newcastle in 1961 to study Fine Art. From 1961 to 1965 Mark Lancaster studied under Richard Hamilton at the University of Newcastle upon Tyne, where he also taught from 1965–66, and then at the Bath Academy of Art, Corsham, Wiltshire, 1966–68, while living in London. He first visited New York City in 1964, where he worked briefly as an assistant to Andy Warhol, appeared in several Warhol movies, and met Jasper Johns, Ray Johnson, Ellsworth Kelly, Roy Lichtenstein, Frank Stella, James Rosenquist, Larry Rivers, Frank O'Hara, Robert Motherwell, Helen Frankenthaler, Norman Mailer and many others. In New York he photographed extensively, and started a series of paintings related to the imagery of the Howard Johnson's restaurants, then ubiquitous, bringing back to England information and ideas, and giving a "New York" lecture and slide show with music that influenced artist friends at Newcastle, such as Bryan Ferry, Stephen Buckley, Nicholas deVille, Tim Head and Keith Milow.

His first one-person exhibition was at the Rowan Gallery, London, in November 1965, where he had many subsequent shows, as well as at the Betty Parsons Gallery, New York, in 1972 and 1974. In 1974 his "Paintings Cambridge/New York" was organized by Richard Francis, at the Walker Art Gallery, Liverpool. His work was included in many international exhibitions organized by The British Council, including the Paris Biennale and "British Painting and Sculpture 1940 to 1970" at The National Gallery of Art, Washington, DC, 1970. He made a series of prints with Kelpra Studios Tate) and Editions Alecto in London, and in New York at Simca Studios which were exhibited at Multiples gallery, New York.

Invited to be the first Artist in Residence at King's College, Cambridge from 1968 to 1970, he became friends with E.M. Forster, Dadie Rylands and other Bloomsbury survivors including Duncan Grant, whose decorations in King's for Maynard Keynes he had restored, in rooms then occupied by Bernard Williams. His paintings refer to the ambiance of Cambridge, the architecture of King's, and bear the mark of American Modernist art as well as references to "pop" imagery, and his own photography.

In 1985 he temporarily returned to England, to Sandgate, Kent. In 1987, following the sudden death of Andy Warhol on 22 February, he made in one year close to 200 small paintings, collectively titled Post-Warhol Souvenirs, which all featured references to Warhol's "Marilyn" image. They were exhibited at the Mayor Rowan Gallery in London in 1988, opening on 22 February 1988, the first anniversary of Warhol's death. Marco Livingstone wrote an article on them for the magazine Art & Design, and they were featured in his book Pop Art, A Continuing History. Several of these paintings are in the collection of the Pallant House Gallery, Chichester, and the Berardo Foundation, Portugal.