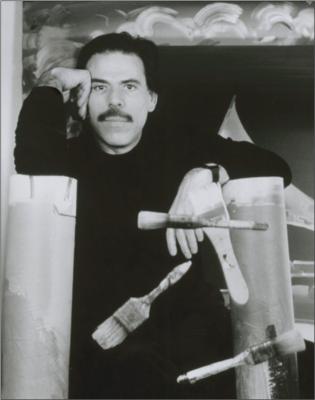 Peter Max (born Peter Max Finkelstein, October 19, 1937) is an American artist known for using bright colors in his work. Max synthesized the "Summer of Love" into artworks from canvas to mugs, clocks, scarves, clothes, and cruise ships. A master of Pop Art, he is the official portrait artist for the Statue of Liberty and welcome banners at the U.S. Ports of Entry.

His work is an indispensable guide for cultural literacy of the 1960s, and his work commands a large following worldwide and is consistently collected by the art world.

In 1938, Max's parents fled Berlin, Germany, his place of birth, to escape the fomenting Nazi movement, settling in Shanghai, China, where they lived for the next ten years. In 1948, the family moved to Haifa, Israel where they lived for several years. From Israel, the family continued moving westward and stopped in Paris for several months—an experience that Max said greatly influenced his appreciation for art.

Max and his parents first settled in Bensonhurst, Brooklyn in 1953 where he attended Lafayette High School (New York City), where he was classmates with future actor Paul Sorvino. In 1956, Max began his formal art training at the Art Students League of New York in Manhattan, studying anatomy, figure drawing and composition under Frank J. Reilly who had studied at the League alongside Norman Rockwell.

In 1962, Max started a small Manhattan arts studio known as "The Daly & Max Studio," with friend Tom Daly. Daly and Max were joined by friend and mentor Don Rubbo, and the three worked as a group on books and advertising for which they received industry recognition. Much of their work incorporated antique photographic images as elements of collage. Max's interest in astronomy contributed to his self described "Cosmic '60s" period, which featured what became identified as psychedelic, counter culture imagery. Max's art was popularized nationally through TV commercials such as his 1968 "un cola" ad for the soft drink 7-Up which helped drive sales of his art posters and other merchandise.

Peter Max invited Satchidananda Saraswati to New York in 1966 for a two-day visit which turned into a permanent residence for Satchidananda, who became surrounded by many students who formed Integral Yoga International. Peter Max is credited with being the catalyst that brought Yoga to the United States in a modern and scientific yet classical approach of Satchidananda Saraswati, who inspired cardiologist Dean Ornish, MD, on his medical thesis. The Yoga master was invited to open the 1969 Woodstock Festival as he was well known in New York for his message and example of peace and his loving service to humanity.

Max appeared on The Tonight Show on August 15, 1968. He was featured on the cover of Life magazine's September 5, 1969 edition under with the heading "Peter Max: Portrait of the artist as a very rich man."

In 1970, many of Max's products and posters were featured in the exhibition "The World of Peter Max," which opened at the M.H. de Young Memorial Museum in San Francisco. The United States Postal Service commissioned Max to create the 10-cent postage stamp to commemorate the Expo '74 World's Fair in Spokane, Washington, and Max drew a colorful psychedelic scene with a "Cosmic Jumper" and a "Smiling Sage" against a backdrop of a cloud, sun rays and a ship at sea on the theme of "Preserve the Environment." July 4, 1976, Max began his Statue of Liberty series leading to his efforts with Chrysler CEO Lee Iacocca to help in the restoration of the statue.