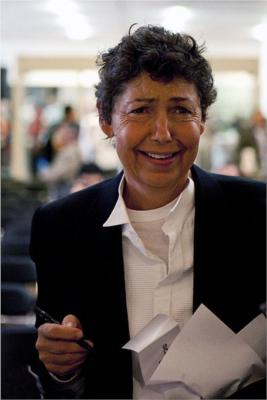 Isa Genzken (born 27 November 1948 in Bad Oldesloe, Schleswig-Holstein) is a German contemporary artist who lives and works in Berlin. Her primary media are sculpture and installation, using a wide variety of materials, including concrete, plaster, wood and textile. She also works with photography, video, film and collage.

Hanne-Rose "Isa" Genzken (pronounced EE-sa GENZ-ken) was raised mostly in the small northern German city of Bad Oldesloe and in Hamburg. She studied fine arts and art history with Almir Mavignier and Kai Sudeck at the Hamburg University of Fine Arts (1968–1971) and the Berlin University of the Arts (1971–1973). To pay her tuition, Genzken worked part-time as a model. In 1973 she transferred to Arts Academy Düsseldorf while also studying art history and philosophy at the University of Cologne. At the academy, fellow students included artists Katharina Fritsch and Thomas Struth.

Upon graduating in 1977, Genzken taught sculpture at the academy. She married German visual artist Gerhard Richter in 1982 and moved to Cologne in 1983. The couple separated in 1993.

Genzken has worked in studios in Düsseldorf, Cologne (designed in 1993 by architect Frank Tebroke); for short stretches in the United States, in Lower Manhattan and Hoboken, New Jersey; and currently in Berlin. After her divorce from Richter, she moved from the Rhineland region back to Berlin.

Genzken has bipolar disorder and goes through manic and depressive phases. She has frequently undergone treatment for substance abuse.

Although Isa Genzken's primary focus is sculpture, she has produced various media including photography, film, video, works on paper, works on canvas with oil, collages, collage books, film scripts, and even a record. Her diverse practice draws on the legacies of Constructivism and Minimalism and often involves a critical, open dialogue with Modernist architecture and contemporary visual and material culture. Genzken's diverse work also keeps her from being predictable in her work. Despite Genzken's diverse work, she is a traditional sculptor at heart. Using plaster, cement, building samples, photographs, and bric-a-brac, Genzken creates architectonic structures that have been described as contemporary ruins. She further incorporates mirrors and other reflective surfaces to literally draw the viewer into her work. Genzken also uses location placement methods to inflict emotions into her sculptor viewers by making her viewers physically move out of the way of Genzken's sculptor due to the placement of the sculptor. The column is a recurring motif for Genzken, a “pure” architectural trope on which to explore relationships between “high art” and the mass-produced products of popular culture.

In the 1970s, Genzken began working with wood that she carved into unusual geometric shapes such as hyperboloids and ellipsoids. In the photographs of her Hi-Fi-Serie (1979), she reproduced advertisements for stereo phonographs.

In 1980, Genzken and Gerhard Richter were commissioned to design the König-Heinrich-Platz underground station in Duisburg; it was completed in 1992. Between 1986 and 1992, Genzken conceived her series of plaster and concrete sculptures to investigate architecture. These sculptures consist of sequentially poured and stacked slabs of concrete featuring rough openings, windows and interiors. A later series consists of other architectural or interior design quotations made from epoxy resin casts, such as column or lamp sculptures. In 1986, Genzken's architectural references switched from the 1910s, 20s and 30s to the 1950s, 60s and 70s. In 1990 she installed a steel frame, Camera (1990) on a Brussels gallery’s rooftop, offering a view of the city below. In 2000, a series of architectural models roughly patched together, was inscribed with Fuck the Bauhaus. Later, in the series New Buildings for Berlin, which was shown at Documenta 11, Genzken designed architectural visions of glass high-rises.