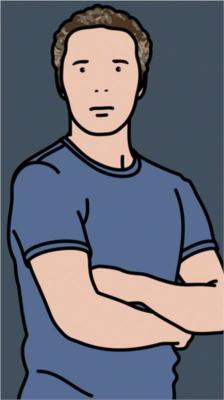 Opie was born in London in 1958 and raised in Oxford. He graduated in 1982 from Goldsmiths, University of London, where he was taught by conceptual artist and painter Michael Craig-Martin.

Opie emerged as an influential figure in the British art scene of the 1980s producing a series of painted metal sculptures that humorously combined loosely painted imagery with steel shapes. Portraits and animated walking figures, rendered with minimal detail in black line drawing, are hallmarks of the artist's style. His themes have been described as "engagement with art history, use of new technology, obsession with the human body" and "work with one idea across different media". When asked to describe his approach, Opie said "I often feel that trying to make something realistic is the one criterion I can feel fairly sure of. Another one I sometimes use is, would I like to have it in my room? And I occasionally use the idea, if God allowed you to show Him one [portrait] to judge you by, would this really be it?"

In 2010, the four-sided LED sculpture Ann Dancing was installed in Indianapolis, United States, as the first artwork on the Indianapolis Cultural Trail.

Opie has also created a monument to singer Bryan Adams.

One of Opie's most notable commissions was the design of an album cover for British pop band Blur in 2000, for which he received a Music Week CADS award. In 2006, he created an LED projection for U2's Vertigo world tour, and in 2008 Opie created a set design for Wayne McGregor's ballet INFRA for The Royal Opera House in London. In 2010, he was commissioned by the National Portrait Gallery to create a portrait of the inventor and engineer Sir James Dyson, titled James, Inventor.

Julian Opie has exhibited nationally and internationally at major institutions and galleries. Solo exhibitions have included the Sakshi Gallery in Mumbai (2012), the Lisson Gallery in Milan (2011); Institut Valencià d' Art Modern in Valencia (2010), Museum of Applied Arts in Vienna (2008), City Hall Park (Public Art Fund) in New York (2004), and the Städtische Galerie im Lenbachhaus, Munich (1999). His work was included in group shows at City Public Art Space in London (2012); Kunstmuseum in Wolfsburg, Germany (2011–2012), the Barbican in London (2011), and the Shanghai Expo in China (2010).