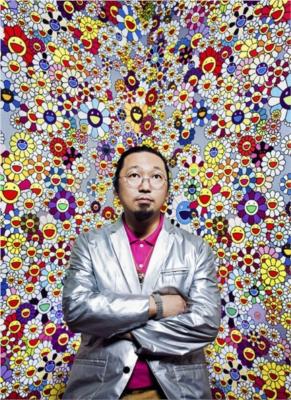 Takashi Murakami (村上 隆, Murakami Takashi, born February 1, 1962) is a Japanese contemporary artist. He works in fine arts media (such as painting and sculpture) as well as commercial media (such as fashion, merchandise, and animation) and is known for blurring the line between high and low arts. He coined the term "superflat", which describes both the aesthetic characteristics of the Japanese artistic tradition and the nature of post-war Japanese culture and society, and is also used for Murakami’s own artistic style and that of other Japanese artists he has influenced.

Murakami was born and raised in Tokyo, Japan. From early on, he was a fan of anime and manga (Japanese comics), and hoped to work in the animation industry. He attended Tokyo University of the Arts to acquire the drafting skills necessary to become an animator, but eventually majored in Nihonga, the ‘traditional’ style of Japanese painting that incorporates traditional Japanese artistic conventions, techniques and subjects. Though he would go on to earn a Ph.D. in Nihonga, he gradually became disillusioned with its insular, highly political world and started to explore more contemporary artistic styles, media, and strategies.

Murakami was dissatisfied with the state of contemporary art in Japan, believing it to be “a deep appropriation of Western trends.” Thus, much of his early work was done in the spirit of social criticism and satire. Efforts from this period include performance art (Osaka Mixer Project, 1992), parodies of the “message” art popular in Japan in the early 90s, (Dobozite Dobozite Oshamanbe, 1993), and conceptual works (e.g. Randoseru Project, 1991). He also began developing his own pop icon, “Mr. DOB,” which would later develop into a form of self-portraiture, the first of several endlessly morphing and recurring motifs seen throughout his work. Though he garnered attention, many of his early pieces were not initially well received in Japan.

In 1994, Murakami received a fellowship from the Asian Cultural Council and participated in the PS1 International Studio Program in New York City for a year. During his stay, he was exposed to and highly inspired by Western contemporary artists such as Anselm Kiefer and especially the simulationism of artists such as Jeff Koons. He established a small studio, which, together with the Hiropon Factory in Japan, became the precursor to his company Kaikai Kiki. After returning to Japan, he would develop the core concepts behind his artistic practice and begin exhibiting regularly at major galleries and institutions across Europe and America.

Murakami has expressed since early on a frustration with the lack of a reliable and sustainable art market in post-war Japan. Largely for this reason, he formulated a strategy wherein he would first establish himself in the Western art world and then import himself back to Japan, building a new type of art market in the process. In order to create something rooted in his own Japanese culture and history but still fresh and valid internationally, he began searching for something that could be considered ‘uniquely Japanese.’ After concluding that elements of ‘high’ art were confounding at best, he began to focus on Japan’s ‘low’ culture, especially anime and manga, and the larger subculture of otaku. His artistic style and motifs (cute/disturbing anime-esque characters rendered in bright colors, flat and highly glossy surfaces, life-size sculptures of anime figurines) derived from this strategy. This is demonstrated in his whimsical Cosmos Ball from 2000, in the collection of the Honolulu Museum of Art.