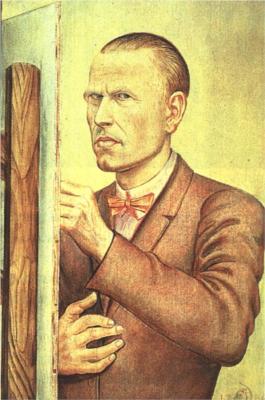 Otto Dix was a remarkable artist of the 20th century Germany. He occupied a lead position in the New Objectivity movement, turning away from the ideas of Romanticism and Expressionism toward a more acidic and non-sentimental perspective to reflect the harsh realities of the interwar German society. Though being a representative of the anti-expressionist movement, Dix incorporated numerous styles into his paintings and etchings, including Expressionism. His works were also influenced by Dadaism, Cubism and Futurism, all of which shaped the artist’s satirical and savage style.

Dix’s story started in his hometown of Gera (1906), where his arts and crafts apprenticeship began with his teacher, Carl Senff, giving life to Otto’s first landscapes. Shortly after finishing his apprentice studies, he applied to Dresden’s Academy for crafts and arts, as industrial crafts were greatly valued by the society of the pre-war era to the detriment of the fine arts. An important part of Dix’s vision was shaped in the First World War, as the artist volunteered to take part and actually earned distinctions fighting in the trenches. He documented the years of war by sending postcards which depicted the macabre fighting scenes, bombarded lands, and shell-shocked comrades.

As the artist described himself, he was a realist, and had an acute need to experience everything first hand, before he could transpose or convey any message within his paintings. He took a surprisingly detached approach to the trauma of the trenches, depicted thoroughly in his paintings such as The Skat Players (1920), but also subsequently in the etching collection titled Der Krieg (1924). Even though the artist was in the first line of fire in the World War I, he managed to find beauty in terror and destruction, and even to bring excitement where others would only see horrors of war. Dix was named a patron of the grotesque, but he embraced it and continued to expose the immorality and lack of ethics of the Weimar Republic.

The artist wished to portray the decay of the post-war life, as German bourgeoisie struggled through high inflation, unemployment, and the macabre display of war cripples and mutilated veterans. Frequent themes that the artist covered in his work, in his time, are the “fair ladies” of the time, often depicted nude, and their defects exaggerated to the point of caricature (Memory of the Halls of Mirrors in Brussels, 1920), soldiers mutilated in the war (Prague Street, 1920) or the horrific aftermaths of the battlefields (Crater field near Dontrien, 1924) and also depravity of the Weimar society (Metropolis, 1927-1928). As the dark days of the Nazis coming to power grew closer, Dix’s notoriety from the 1920’s fell apart, and his artworks were stripped of value and censored by the regime. He was removed from his position of university professor at Dresden Academy of Fine Arts, and his work was included in the Entartete Kunst (degenerate art) show, where all artworks that were not within the lines of the Nazi standards were displayed.

During the World War II, Dix had to tone down his characteristic style. He concentrated more on landscapes, to fit the requirements of the Fuhrer's laws. The artist was commissioned to fight again when the war was almost over, and was later imprisoned by the French. Coming home to a two-sided Germany, where the art world was bound by politics, Otto was torn between his professional relations in the East, and his home in the West. While Eastern Germany turned to the socialist aspect of art, focused on the labor theme, the Western Germany art world shifted toward the United States and new art movements, such as Abstract Expressionism. In a world where he did not fit anymore, Dix struggled to sell his art, as a sharp, distorted edge of his realistic style became blunt.

Otto Dix is regarded as a pivotal figure for the New Objectivity movement in Germany, who had the courage to portray the uncensored versions of two harsh wars and a bleak, depraved society in between, using his satirical and grotesque characters and themes to make a direct statement through his artwork.

Wilhelm Heinrich Otto Dix (German: [ˈvɪlhɛlm ˈhaɪnʁiç ˈɔto ˈdɪks]; 2 December 1891 – 25 July 1969) was a German painter and printmaker, noted for his ruthless and harshly realistic depictions of Weimar society and the brutality of war. Along with George Grosz, he is widely considered one of the most important artists of the Neue Sachlichkeit.

Otto Dix was born in Untermhaus, Germany, now a part of the city of Gera. The eldest son of Franz and Louise Dix, he an iron foundry worker and she a seamstress who had written poetry in her youth, he was exposed to art from an early age. The hours he spent in the studio of his cousin, Fritz Amann, who was a painter, were decisive in forming young Otto's ambition to be an artist; he received additional encouragement from his primary school teacher. Between 1906 and 1910, he served an apprenticeship with painter Carl Senff, and began painting his first landscapes. In 1910, he entered the Kunstgewerbeschule in Dresden, now the Dresden Academy of Fine Arts, where Richard Guhr was among his teachers. At that time the school was not a school for the fine arts but rather an academy that concentrated on applied arts and crafts.

The majority of Dix’s early works concentrated on landscapes and portraits which were done in a stylized realism that later shifted to expressionism.

When the First World War erupted, Dix enthusiastically volunteered for the German Army. He was assigned to a field artillery regiment in Dresden. In the autumn of 1915 he was assigned as a non-commissioned officer of a machine-gun unit on the Western front and took part in the Battle of the Somme. In November 1917, his unit was transferred to the Eastern front until the end of hostilities with Russia, and in February 1918 he was stationed in Flanders. Back on the western front, he fought in the German Spring Offensive. He earned the Iron Cross (second class) and reached the rank of vizefeldwebel. In August of that year he was wounded in the neck, and shortly after he took pilot training lessons.

He took part in a Fliegerabwehr-Kurs ("Defense Pilot Course") in Tongern, was promoted to Vizefeldwebel and after passing the medical tests transferred to Aviation Replacement Unit Schneidemühl in Posen. He was discharged from service in 22 December 1918 and was home for Christmas.

Dix was profoundly affected by the sights of the war, and later described a recurring nightmare in which he crawled through destroyed houses. He represented his traumatic experiences in many subsequent works, including a portfolio of fifty etchings called Der Krieg, published in 1924.

At the end of 1918 Dix returned to Gera, but the next year he moved to Dresden, where he studied at the Hochschule für Bildende Künste. He became a founder of the Dresden Secession group in 1919, during a period when his work was passing through an expressionist phase. In 1920, he met George Grosz and, influenced by Dada, began incorporating collage elements into his works, some of which he exhibited in the first Dada Fair in Berlin. He also participated in the German Expressionists exhibition in Darmstadt that year.