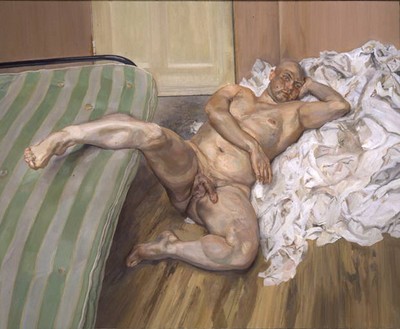 Man with Leg Up

This is one of Freud's many paintings of the Australian performance artist Leigh Bowery. Freud's friends introduced them, hoping that Bowery's flamboyant style, which included bright colors and sequins, would inspire Freud to abandon his usual drab palette. Being obstinate, Freud asked Bowery to shave his whole body. Freud saw Bowery's muscular legs as his best feature, and often showcases them in a series of unusually unselfconscious and passive poses that thwart the conventions of male portraiture.

In Man with Leg Up, Bowery lies on the floor with his legs splayed. One leg rests on the bed while the other bends underneath him, as if keeping him from sliding down the floor, which tilts toward us. Nearly all elements in this scene, from the supine pose to the splayed legs indicates vulnerability. Exaggerated foreshortening makes Bowery's top half appear further away, highlighting the exposure of his hairless groin, which occupies the very center of the picture. Bowery seems at ease with this. His facial features are relaxed. His left arm cradles his head while his right is draped across his chest, regarding us as if to say, "so what"?

The two men developed a friendship, and Freud continued to paint Bowery over the course of four years, until his death from AIDS in 1994.