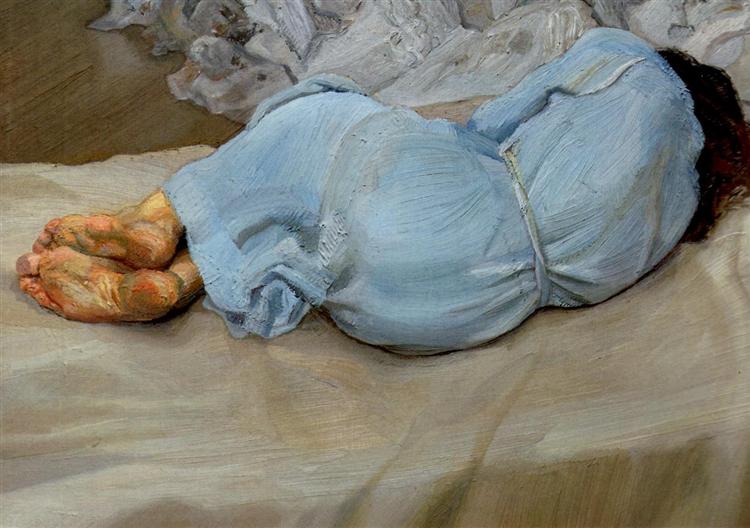 This artwork was painted between 1987 - 1988, when Freud was already an established artist. The portrayed woman is one of his two daughters from his marriage with Kitty Garman (a daughter of a sculptor Jacob Epstein).

What is quite innovative in Freud’s approach to the depicted subject, is the perspective. The artist represents a lying body completely turned away from us, so we cannot see the facial expression - but still, the painting is quite expressive. The body is curled up in the fetal position, which can be interpreted as a reaction to a physical or psychological trauma. Representing his sleeping daughter like this, Freud may be suggesting that he is a helpless observer of her mental and emotional pain. He also is putting the viewer into a position of a voyeur who intrudes a woman’s personal space and gets the insight of how she feels. Besides, this painting could be read in a feminist key - a woman is expressing her trauma only when she is sleeping, only when she is unaware that others are watching.

In his paintings, Freud demonstrates a tangibility of humans - be it their emotional pain and struggle, or be it naturalism in depicting of their bodies. This tangibility of Annabel is shown in a brute physicality of her feet. The artist emphasizes small details, like motion of muscles and texture of the skin. He de-idealizes the human body, breaking with the tradition of representing a female figure as a beautiful and flawless object, and insists on the corporeality of all bodies. This de-idealization reminds us of Caravaggio’s realism, which can be seen in his works such as Madonna of Loreto, Entombment of Christ or Crucifixion of Saint Peter. In a similar manner, Caravaggio’s depiction of saints’ dirty feet highlights the imperfection of the human body and human nature.