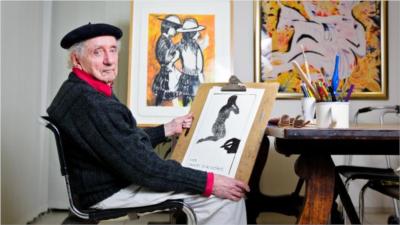 Charles Blackman OBE (born 12 August 1928), is an Australian painter, noted for the Schoolgirl, Avonsleigh and Alice in Wonderland series of the 1950s. He was a member of the Antipodeans, a group of Melbourne painters that also included Arthur Boyd, David Boyd, John Brack, Robert Dickerson, John Perceval, and Clifton Pugh. He was married for 27 years to the noted author, essayist, poet, librettist and patron of the arts, Barbara Patterson Blackman.

Blackman, born 12 August 1928 in Sydney, left school at 13 and worked as an illustrator with the Sydney Sun newspaper while attending night classes at East Sydney Technical College (1943–46) though was principally self-taught. He was later awarded an honorary doctorate. He came to notice following his move to Melbourne in the mid-1940s, where he became friends with Joy Hester, John Perceval and Laurence Hope as well as gaining the support of critic and art patron John Reed. His work met critical acclaim through his early Schoolgirl and Alice series, the latter Blackman's conception of Lewis Carroll's most famous character. For some time while painting the Alice series, Blackman worked as a cook at a café run by art dealer Georges Mora and his wife, fellow artist Mirka Mora.

In 1959 he was a signatory to the Antipodean Manifesto, a statement protesting the dominance of abstract expressionism. The manifesto's adherents have been dubbed the Antipodeans Group. His work is associated with dreamlike images tinged with mystery and foreboding. In 1960 he and his family lived in London after Blackman won a Helena Rubenstein travelling scholarship, settling in Sydney upon his return five and a half years later. In 1970 he moved to Paris, when awarded the atelier studio in the Cité des Artes. He lived there for a year at the same time as John Coburn, and subsequently returned often, as Paris was an eternal source of inspiration.

After 27 years of marriage, Barbara Patterson Blackman and Charles Blackman divorced in 1978, largely because of his alcoholism. He married the young artist Genevieve de Couvreur, a 19-year-old friend of his children. She divorced him after 8 years, as his alcoholism grew deeper; and in 1989 he married a third wife, Victoria Bower, whom he also later divorced. He has six children, Auguste, Christabel, Barnaby, Beatrice, Felix and Axiom, most of them artists and musicians in their own right.

His accountant and close friend, Tom Lowenstein, set up the Charles Blackman Trust to manage the painter's affairs. Lowenstein periodically sells off the works that Blackman still owns to ensure Blackman's expenses are taken care of. Blackman suffers from dementia and lives a simple but happy life in his rented home in Sydney.

He has won many prizes and distinctions, culminating in a major retrospective in 1993 and being appointed an Officer of the Order of the British Empire (OBE) for services to Australian art in 1977.

A portrait of Charles Blackman by Jon Molvig won the Archibald Prize in 1966.